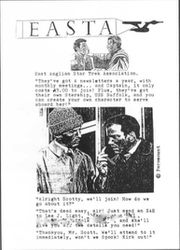 We are into member participation and have our very own starship -- USS Suffolk, and when you join you get to create a character of your very own to serve aboard her -- and many even feature in the stories there told!!! We try to cater to everyone's needs, with such items as the "Scrawl Wall," "Astronomical Data," "Debate Column," and evan an agony column -- "Dear Aunty T'Pau..."!

In 1985, the club published a zine by Lee Light and Linda Read called Astral Union. Half the proceeds from this zine went to the BSFR Film Fund.