Dreamlovers is a "semi-autobiographical" 222-page novel by Pete Fisher. 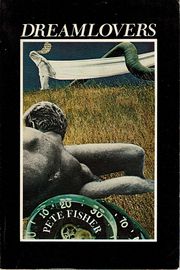 In it (among other things), the author fantasizes about having a sexual relationship with William Shatner, making elements of this book RPF.

A similar book may be Starf*cker.

Have you ever fantasized a romance with a favorite film or TV star? With the young marine on leave who helps out at the local newspaper stand? Pete did - and more - he made sure the star and the marine knew about it. ... Not exactly a novel, not entirely autobiography, Dreamlovers is a fusion of the two ...

Charting one man's search to turn fantasy into reality -- despite a lover, a career, and uncomprehending friends. Dreamlovers is Pete Fisher's wildest, sexiest, and most involving book.

As Related to "Black Star"

I first came into contact with Pete Fisher in January of 1983 shortly after reading his pro novel, DREAMLOVERS. The book had shocked, delighted, and intrigued me enough to write him a letter expressing my admiration for his honesty and talent. I was also panting to read the Star Trek novel he had mentioned writing. He responded with a happy openness that made us close friends in an amazingly short time.

Until he met me, Pete had never read a fanzine or or been involved in active fandom other than attending a Star Trek convention held in New York in 1976. When I suggested printing BLACK STAR as a fanzine, he was delighted at the idea of other fans reading his work. Excerpt for some updating on his part and the usual editing involved in any zine, BLACK STAR remains very much as it was originally written over six years ago.

This year Pete has continued the story in a novel entitled WORMHOLE. Unrepressed Press has plans to print this along with a third part which he has given me permission to write. (I just love to do sequels!) Anyone interested should please send a SASE for price and availability.

Has anyone else read "Dreamlovers" by Pete Fisher.? I found it to be the pits, the worst, Gag City. I thought the parts where he described how his characters evolved were quite interesting as they dealt with the creative process and writing, but I simply did not understand his fixation on WS, nor did I understand the relationship between him and his lover(s). Though the journal style the novel was written in (I think he termed it "semi-autobiographical") you get in in-depth, close-up picture of the personality of this guy, and I found that I didn't like him at all. I was actually rather disgusted by him. [2]

I liked DREAMLOVERS. I think what I appreciated most was Pete Fisher's candor. What did you find "disgusting" about him? I know ST fans who've gone off the deep end at least as badly as he, but lacked his perspective on what they are doing. ST fans have been known to let their marriages/relationships collapse because they were lost in a fantasy world with the show or the stars. At least, Pete and his lover Marc were able to talk about it openly. And Pete at least survived his fantasy obsession, which is more than you can say for some fans. [3]

I, too, have read Dreamlovers by Pete Fisher, and I thought it was the pits. It was a great disappointment. From some comments I'd read about it, I expected it to be better. Gag City, is right! I hope his fan novel. Black Star is better. It couldn't be much worse, that's for sure. [4]