Starf*cker has the subtitle "A Twisted Collection of Superstar Fantasies." It is a 304-page book edited by Shar Rednour. 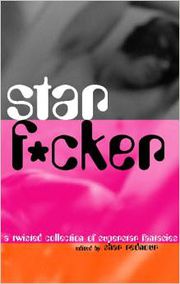 It is a pro example of RPS.

This book was originally a zine: "I also edited and created starphkr the zine which afterwords became a book spelled slightly different: STarf*cker. (Alyson Press). The zine was nominated for an ABA award coming after Bust which has thousands of readers—and had even just been on MTV — so I was proud of that." [1]

Amazon's description: "Admit it, everyone has fantasies about super stars-some weirder than others-but we all do it. Fortunately, some people also write about it, which explains this collection of strange fantasies of starstruck writers, including some of the top gay, lesbian, and bisexual writers today. Carol Queen does Marilyn Monroe, Bill Brent does Elvis, Cecilia Tan does Ziggy Stardust, Michelle Tea does Motley Crue (all of 'em!), M. Christian does Whoopi Goldberg, and Susie Bright does Dan Quayle (we told you it was weird!). Join your favorite writers as they join their favorite celebrities in an erotic collection unlike any other."

This book is an example of underground zine and fanfiction becoming more mainstream.

If tales of carnal encounters with celebrities strike you as a goofy idea for an erotic anthology, make a quick catalogue of your dreams in the past year and tote up the number of times Melissa Etheridge has come to your window or Matt Damon has revealed his hidden talent. It's no surprise that the faces we see on the screen and the voices that pipe through the radio all day come to seem as real as those of our friends and lend a little glamour to our fantasy lives. In Starf*cker, an FTM reaches out to the dead Brandon Teena and Valerie Solanas (the feminist writer who achieved her 15 minutes by shooting Andy Warhol), the girls of Salt & Pepa come in for some latex loving, and Claire Danes gets an unexpected view of her bad-boy heartthrob Johnny Depp breaking in a new musician for his band. These stories, culled from Shar Rednour's sick and fabulous little e-zine Starphkr, are uneven in quality, but each is as wicked as the next. Don't miss Claudius Reich's "Getting Frisky with Uncle Bill," which details a churchyard encounter with William S. Burroughs. --Regina Marler [2]

Dating back to as early as the 1950s, book publishers had been creating unauthorized pulp biographies featuring various musicians. This type of work was easy and cheap to produce and the companies publishing them faced little legal risk, even if the biographies stretched the limits of the truth. Too many bands and recording companies saw them as a source of cheap publicity to help them grow their fan bases. More modern publishers would see to get in on the act, openly publishing fictional fantasy stories about celebrities, celebrities that included musicians. One of the most notable example was STARF*CKER published by Alyson Books in 2001. (“Band Fiction Stranger Than Truth”) It is thus some what surprising that BandFic communities were not active earlier in publishing their stories not just as fanzines but as published books. [4]