Dorn is the club newsletter published by the Michael Dorn Appreciation Organization.

The editor asked for all tribs to be send on an "IBM compatible 5 14/ double density diskette in ASII format if possible with return packaging and postage." 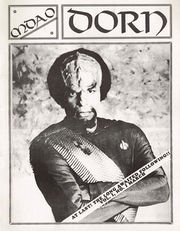 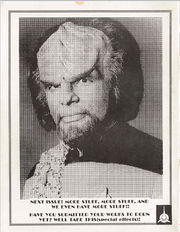 back cover of issue #1
From the editor:

I would like to thank the thousands of you who have recently joined the "Michael Dora Appreciation Organization" initialed as MDAO and phonetically heard as "ma-dow".

I have selected the above "klingonese" word, QAPLA, as a dual meaning in titling this editorial. Each issue will highlight a different "klingonese" salutation based on availability. I find the Klingon Way of salutation indeed a contradiction in terms.

"QAPLA", as used in diction by Marc Okrand (a proud and worthy friend of myself) in THE KLINGON DICTIONARY, means success and sucess to me is both getting out this much awaited edition and receiving approval from Michael in carrying out this endeavor.

I formally met Michael back in October of '88 after having spoke with his manager, a delightful woman, Marianne Golen. It was at a Creation con in that incredible and fantastic town of Baltimore, Maryland (Get the hint!). I had arranged a meeting with him where I discussed my intentions. He expressed an interest that developed into what you have in your hands right now. Thanks Mike!

Our main goal is not to be a personal trash rag mag but to relay to you information and other tidbits that may be commonly known to a vast majority of you and to tell you certain things that may not, pending Michael's approval of course.

I intend to publish MDAO six times a year. Look for it in March, May, July, September, and January depending on "clear roads". Submission deadlines fall on the last day of the preceding month. Speaking of such, all offset covers, artwork, original articles/stories, reports, bad jokes, very bad jokes, club minutes (the short versions), letters, fan networking, and praise will be welcomed subject to approval by myself and myself! Works to be returned will be sent with the proper shipping materials and postage. Reccomended writings of any sort should be done on an IBM compatible 5-1/4" double density diskette in ASII format (Hey! Yell at my 'Puter Composer. He's the one with the shopping list!!).

In creating this organization, I need your support and your help. With it, we can show. Michael that there are no boundaries to our appreciation in making ST:TNG's most interesting crew member one of our own.