Doorways is a K/S story by Jenna Sinclair. 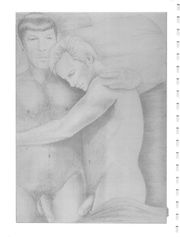 art by Chris Soto for "Doorways"

It was published in the print zine First Time #33.

From the publisher: "In a meld with Spock, Kirk recalls his “lesson” when the unit he was in as a cadet is abducted by slavers."

"The big, bearded, gray-haired man sat morosely in the corner of the bar. He was slouched back in his seat, staring fixedly at the mug on the table in front of him, fingers lightly curled around it. To the waiter's practiced eyes, he was a customer who would be there for a while, drowning whatever demons he saw in the alcohol. The man would be surly, and would probably leave a lousy tip."

If you are familiar with Jenna Sinclair's Sharing the Sunlight series, this story will surprise and delight you. Set outside the STS series, it is definitely out of the ordinary,

I have loved "Doorways" ever since the first time I read it a few years ago. It is exciting, sexy, unusual, well-written, sexy, fast-paced and sexy. Actually, it's way more than sexy. But is it ever sexy!

The story opens cleverly from the POV of a blase waiter as he serves drinks to a man at the bar. Then the scene switches to Kirk and Spock on the Enterprise and Kirk has a tale to tell Spock. Except it was kind of funny that Kirk could only recount his story by getting naked on the bed! Spock. too, gets naked and after all that, in a neat scene, they meld so that Spock will truly understand what happened to Kirk.

Kirk is seventeen years old and has been captured, along with many other Stardeet cadets his age, to be sold as slaves. Spock is there in the cargo hold of their prison ship and Kirk is the only one who will talk to him as the others are wary and mistrustful. In this huge, dark cargo hold-prison, a spotlight shines in the center. Kirk witnessed two of the youths having sex in the spotlight while everyone watched. Boy, did that sound neat, but we didn't get to see it.

Anyway, K & S are friends and they carry on a wonderful conversation about their circumstances, their feelings, and the possibility of escape, which Kirk naturally promotes. Then Kirk is taken from the hold to a room with a man named Max, the man we met in the bar. He's a sort of all-things-sexual trainer, secretive and mysterious, and a character I will not soon forget. Handsome, silver-haired, just my type, and evidently Kirk's type as Max imparts his considerable sexual repartee upon a drugged Kirk.

The use of the drug was not artificial or forced as it might seem. It is very clever and well-integrated as Kirk must respond positively to Max's suggestions. And it's made clear that Kirk is partially a willing participant. So yes, Kirk was drugged, but nothing was violent or terrible and he did enjoy lots of the goings-on. A very good example of ravishment as opposed to rape, even if Kirk did call it that.

So there's this scene that was of the carpet-thrashing variety, along with some neat words of advice from Max: "There are many different kinds of slavery. Sometimes, a man can be a slave even when he's free. He can be a slave to his fears, to the things his father taught him. to what society tells him is right A man can be caught in a cell of his own making, can be very unhappy, and never even realize what a slave he is" Fascinating words as we suspect Max is speaking about himself.

And, oh boy, one of my favorite K/S things is when Kirk is being appreciated for the gorgeous, golden man that he is.

Damn this is sexy! Check this out; "Now, Max was still, leaning forward, talking into his ear "Whenever a man, or an alien male, puts his cock in you. I want you to think it feels wonderful. I want you to love how it feels. You like it now, don't you, Jim?" I know I do. "Max's voice became breathless, and he gave a little thrust that rocked the boy forward. For the first time, Jim heard a thickening passion in his words. "Will you do that now, Jimmy? Will you come with me?" Oh mmyygoddd....

Afterward. Kirk reveals to Max that he's in love with Spock. Rescue comes and Max tells Kirk to allow love to blossom. "Love can be right for you now. Everybody deserves a chance at it Become that starship captain that you want to be, but don't give up on your Vulcan, or on love. If he's who you really want if what I've taught you today has meant something, opened some doors for you, try it with him."

I just love this Max character. He's so wise and commanding, yet tender and vulnerable. We wonder what he's doing and why. Did Starfleet not only sanction this, but did it hire him? A nice mystery left up in the air.

One nit-pick is that I would have preferred to have remained in suspense until the end of the story to know for sure that Kirk and Spock would have formed a relationship. As it was. with the mind-meld scene in the beginning and their established relationship already shown, we know the/re going to end up together I would have enjoyed being "surprised" at the end when they are in each other's arms.

But I really loved this story and have already badgered said author plenty of times for a sequel. [1]

Another very well written story, as always, from Jenna. This one about Kirk's first sexual experience at the hands of a double agent named Max is no exception. Jenna's gift as a writer lies in her well-detailed plots and characterizations. I especially liked the opening and closing scenes of Max's self-examination of his motives. Max is a fully fleshed out character, totally believable as he walks the thin wire of duty to the Federation, responsibility to the young men he "trains" to become sexual slaves, and trying to fulfill his own needs. He's a nice guy. Maybe too nice. I have a hard time viewing rape as a positive learning experience, not to aention that Kirk would somehow view his drugged deflowering as opening up the "doorway" to a relationship with Spock. Maybe you did too good a job. Jenna. You made me like this young Kirk very much, like how he reacts to the ignored and outcast Spock, but I couldn't quite believe he would take the whole thing as well as he did. And would he really sit down and have a drink with the man? [2]

The question that arises from this story is whether the ends justify the means. Max, the undercover Starfleet officer who brainwashed teenagers into accepting lives as sex slaves, exhibits the endless capacity that humans have for rationalizing their actions no matter how evil they are. I wonder about his values and priorities. I also wonder about Starfleet's values and priorities since they were the ones who gave him such an assignment. Is there nothing that Starfleet isn't willing to do in order to recover information? And if there are no ethical limits on what an agent of Starfleet may be asked to do, what is the difference between the Federation and the Klingon Empire? I was bothered by Kirk's failure to judge Max from an ethical standpoint when he met the man on the starbase. The Kirk I know doesn't believe that Starfleet is always right. He has disobeyed orders for the sake of a principle and has even abrogated the prime directive. I found this a rather disturbing and cynical story. [3]

I bought this zine at Shore Leave, noticed a completely unfamiliar title by a very familiar author, and couldn't resist sitting down to read the story on the spot. Ifs definitely not part of Jenna's Sharing the Sunlight series! It is, however, an engrossing and highly erotic story with something of a dark side, not to mention an enigmatic and surprising original character. I have to admit that my favorite part was the central "flashback" section, in which we learn about Cadet James Kirk's experiences after he and some fellow Starfleet Academy cadets (including Spock) are captured by slavers during a training cruise. The author took some chances here, and I think it works wonderfully...and I'm not going to say another word about the plot. Ifyou haven't read this story, you really need to experience its twists and turns for yourself. Highly recommended. [4]