Dominic Sherwood is an English actor and model. He is best known for his role as Jace Wayland in the Freeform television series Shadowhunters. 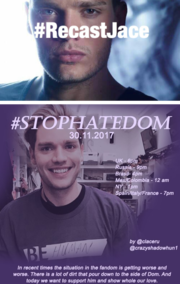 The two opposing sides of the flame war. The first image is a promotional image for the RecastJace petition. The second image is promoting the usage of #StopHateDom

In November 2017, Matthew Daddario held a Facebook live stream with fans. During the stream, Dominic entered the room and greeted his castmate by referring to him as a 'fag'. The Shadowhunter fandom reacted strongly to this incident. A large number of fans were deeply upset with Dom's casual usage of a homophobic slur and some even called for him to be recast. Many also found it shocking that he would call Matt a 'fag' particularly because Matt portrays a canonically queer character on the show.[1]

Later on the same day, Dom posted an apology on Instagram, describing his behaviour as "disgusting". In the video, Dominic says he holds himself "fully accountable" and that he wasn't trying to "make excuses".[2]

The incident gained sudden controversy within fandom. Soon after the incident, Matthew Daddario was a trended search on Tumblr, where many people commended Matt's handling of the situation. The incident, however, caused a divide within fandom between those who hate Dominic for his actions, and those who don't. This is particularly clear from the Twitter hastags used by fans: