Deleted scene of Ezekiel training Shiva for war was a meme in The Walking Dead fandom. It shows King Ezekiel, placed in a scene from the film Love Actually, holding a sign with pictures of Negan and Rick Grimes with the text "eat" and "Don't eat" written above. It was a way to humorously explain how Ezekiel's tiger Shiva knew who was okay to kill and who wasn't when she was let loose in the season 7 finale. As of June 2018 the meme had over 2600 notes on Tumblr. 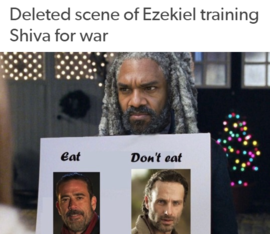