The Crowley Big Bang was a big bang challenge focused on the Supernatural character Crowley. It ran for two rounds during 2010-2013 on LiveJournal. Writers in 2010 were required to write a story of 15,000 words, but that limit was lowered to 10,000 in later rounds. Artists were required to create a piece using whatever format they chose, but had to be a minimum of 500x500 in size, or they could create a fanvid that was a least one minute in length. 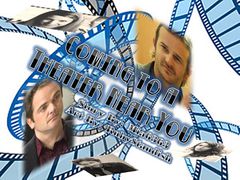 Banner for Coming to a Theater Near You by rubystandish

Title: Coming to a Theater Near You
Author: mia6363
Artist: rubystandish
Type: Slash
Pairing and/or Characters: Crowley/Gabriel, side Chuck/Kali
Word Count: 16k
Rating: NC-17
Warnings: Um… light use of toys?
Disclaimer: I don’t own it.
Summary: Crowley is an uptight Hollywood shark and he’s finally taking a two-week long vacation. He’s planning to unwind and coast by until he eventually takes the plane back to Los Angeles. Instead, he meets Gabriel.


Title: A Futures Contract
Author: ciaocat
Artist: ninurta
Type: Leans more toward gen than slash
Pairing and/or Characters: Crowley/Gabriel
Word Count: 12K
Rating: R
Warnings: Language, violence, especially involving depictions of Hell and references to child abuse.
Disclaimer: I don’t own Supernatural.
Summary: Like all demons, Crowley was human at one point; like some demons, he had one foot in Hell from the very beginning. And like some people with a foot in the Pit, he attracted the attention of the Trickster.


Title: Pity this Busy Monster
Author: helena_eternal
Artist: preferthemoss
Type: Slash, with some background het.
Pairing and/or Characters: Crowley/Cas, with background Arthur/Eames, Ariadne/Yusuf, and Dean/Lisa.
Word Count: 23,844
Rating: PG-13
Warnings: Modern day AU, very little sexytimes, crossover with Inception.
Disclaimer: Not mine!
Summary: Fergus Crowley is head of Crossroads Publishing, an influential business in New York; Castiel Milton is head of Running with Sigils, a significantly lesser-known charity for children. Normally they would never meet, but it turns out that Castiel is sitting in the future building of Crowley's dream bookstore.


Crowley wants the building. Castiel wants... something else.


Title: The Nanny
Author: logopolitan
Artist: ciaocat
Type: Slash
Pairing and/or Characters: Crowley/Castiel
Word Count: 14,317
Rating: PG
Warnings: There is so much fluff, you could drown in it.
Disclaimer: I do not own Supernatural or the 1993 sitcom The Nanny.
Summary: It's 1991, Crowley needs a new nanny, and Castiel needs a new job.


Title: The Guardian: A New Beginning
Author: kateyes085
Artist: vampirebites13
Type: Het with a side of slash
Pairing and/or Characters: Crowley/OFC; implied Bobby/Crowley; mention of any and all characters up to and including any US-aired episodes.
Word Count: 12,195
Rating: R
Warnings: Heterosexual relationship, angst, humor, implied and nongraphic character deaths.
Disclaimer: All stories posted are not for profit and are works of fiction.
Summary: Once upon a time, Dean Winchester stopped the apocalypse and saved the world with the help of a demon called Crowley, who became the King of Hell. Little did he know that years later Crowley would take on a different title, son-in-law. If he knew back then what he knew now, Crowley's bones would have been dust.


Title: to make them die or life in sorrow
Author: cashay
Artist: viviantanner
Type: slash
Pairing and/or Characters: Crowley/Lucifer, Crowley/Castiel, mentions of Crowley/Lilith
Word Count: 20.678
Rating: NC-17
Warnings: violence, torture, blasphemy, dark!fic, character death (no main character)
Disclaimer: I own nothing yadda yadda
Summary: Crowley wasn't always a Demon, in fact he never was. A long time ago Crowley was an Angel of the Lord known under the name Adnarel. Following Lucifer, his mate, he fought at his side against the Host and led the Armies of Hell. Until Lucifer had no longer any use for him.
Betrayed by Lucifer and abandoned by the Host Adnarel finds himself falling in the world of men. But he finds something else to believe in – himself. Something between Heaven and Hell Adnarel gives up his name and his past for revenge. Lucifer and the Host would pay and he would rise above them all as the King of Hell.
At least that was the plan, which worked perfectly well until he met Castiel.


Title: Each Our Own Devil
Author: rillalicious
Artist: threnodyjones
Type: Slash and het, but nothing explicit
Pairing and/or Characters: implied Bobby/Crowley, Harry Potter canon pairings, Draco/Hermione
Word Count: ~22,000
Rating: PG-13
Warnings: Infidelity (more specific warnings on master post)
Disclaimer: I own nothing you recognize from Supernatural or Harry Potter. Making no money.
Summary: Crowley has Lucius Malfoy's soul and a master plan. Draco is determined to get it back, and is even willing to ask Hermione Granger for help if it gets the job done. Luckily, Harry knows a couple of hunters who might be able to lend a hand.


Title: Let's Party 'til the World Ends
Author: meh_forget_it
Artist: cashay
Type: Slash
Pairing and/or Characters: Crowley/Harry/Gabriel, Crowley/Harry, Crowley/Gabriel, mentions of Gabriel/Harry and Lucifer/Harry (*cough* not that Harry’s a slut or anything…Lol)
Word Count: 31,901
Rating: NC-17 (is there any higher? If so… maybe that)
Warnings: SLASH, sexual situations between two/three males, violence, blasphemy, torture, Death, strong language, OOCness, possible spoilers for season six up to episode four.
Disclaimer: I do not own Harry Potter or Supernatural, they belong to JK Rowling and Eric Kripke respectively. I am not making any money from the use of these characters.
Summary: Crowley didn’t even know Death even had a master, so when he met him, he was understandably confused and shocked. That reaction swiftly turned into disturbed and annoyed once the being introduced him to an identity confused Archangel in Witness Protection with a habit of leaving sherbetty hand prints on the shoulder of his new suits.
What kind of name was Harry anyway? 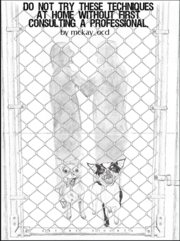 Title: Do Not Try These Techniques At Home Without First Consulting A Professional.
Author: mckay_ocd
Artist: ninurta
Artist: satavaisa
Type: Gen with a hint of Slash...
Pairing and/or Characters: Crowley, Gabriel, Winchesters and Bobby.
Word Count: 16k
Rating: PG
Warnings: Really very cracky with a dash of violence.
Disclaimer: Supernatural is not mine, I mean it no harm.
Summary: Gabriel thinks Crowley shouldn't take himself so seriously and plays a trick to help him loosen up. Unfortunately it backfires and turns them both into Chihuahuas. That wouldn't be so bad if they hadn't ended up in Sioux Falls where there seems to be a lot of Dogs and their owners turning up dead... Throw in Bobby, the Boys and Cesar Milan and it all gets quite interesting.


Title: Crowley and The Wifelet
Author:pinkyapples
Fandom/Genre: Supernatural, Crack-fiction
Characters/Pairings: Crowley, The Wifelet (OFC), mentions Castiel, Sam and Dean Winchester, Bobby Singer, Bela Talbot, minor OCs
Rating: Pg-13
Word Count: 10 907+
Warnings: Language, Adult themes
Author's Note: This was to have been posted alongside the Official CrowleyBigBang 2013 stories but real life threw my artist and self a whammy. There may or may not be art to accompany the story posted later. In the meantime here's my effort.

I couldn't have done this without my fabulous Alpha Flowerpot 65, who has braved all manner of Crowley type sabotage in helping me bring this frivolity to life. You patience and encouragement mean the world to me. To verucasalt123 for her Beta'ring and help with American terms many thanks. Any uncaught typos are all mine - it's hard not to want to 'tweek'. :)

Hope you read and enjoy this offering as much as I enjoyed writing it.


Summary:“That’s it! Enough of this micro-management bollocks, there must be somebody here in Hell intelligent enough to handle the day to day details.” Crowley fumed silently, and getting up from his desk, walked out of his office and through Hell to find himself a personal assistant. “What I need is somebody reasonably intelligent with a strong sense of self-preservation, but not overly ambitious. A Poodle would probably be best, unfortunately, I don’t speak dog,” Crowley mused as he perused the endless line of souls...

What he gets is The Wifelet, a soul so full of domestic frustration he wonders whether he'll survive... Unadulterated crack, ridiculous plot and almost as fluffy as a Unicorn.


Title: Uncle Crowley's Adventures in Babysitting
Fandom: Supernatural
Rating: PG-13
Wordcount: 10k
Summary: Gen. Humor. He's the King of Hell, not a bloody babysitter, but that doesn't stop Castiel from leaving two de-aged Winchesters with him. Oh, bollocks, what's he supposed to do with a toddler and a six-year-old? Set in season 6 canon.
Warnings: minor violence toward children, minor language, torture (of monsters)
A/N: Banner by me. Written for unofficial track of the crowley_bigbang. I intended for this to be humorous so forgive me if the canon-plotline isn't terrible relevant. It's set during that short time in season 6 after Sam's soul has been returned and while the boys still believe Crowley to be dead.


Title: Some People Have Real Problems
Fandom: Supernatural
Word count (total fic): 20,245
Rating: PG-13
Pairings: None, really, maybe some Dean/Cas hints. Don't hold the lack of pairing against it, though--If you're a dog lover, you'll probably like this story... Summary: When Crowley's meatsuit mutinies it's up to Castiel and the Winchesters to help The King Of Hell get back into his favourite blood and guts condominium. What starts off as a seemingly easy assignment quickly turns into a drama about a dead dog and a haphazard pile of memories. Putting a leash on Crowley's body proves harder than expected.
Notes: Takes place after season five, AU afterwards--Sam was rescued from Hell in much the same manner as Dean. Otherwise it's canon.


This was written for the crowley_bigbang on livejournal. I didn't quite make it for the official track, so this is the unofficial posting :P.


Title: Some Devil - Arc One - The Minor Fall
Author:ravenlowe
Artist:ninurta
Word Count: ~32k
Rating: R
Characters/Pairings: Crowley(Samael), Lilith, Lucifer, John Winchester; Crowley/Lilith, Crowley/John Winchester
Warnings: Unsafe dub-con D/s relationship (non-explicit), religious context, adult themes, Crowley's mouth, Spoilers up to season 5
Notes: This series takes the Angel!Crowley AU and runs a marathon with it. I almost bit off more than I could chew, but somehow I made it this far. Now to crank out the rest of the trilogy. Thank you crowley_bigbang for hosting the event, ninurta for the awesome art, and askpapawinchester for the beta, the help, the encouragement, and for being the John to my Crowley. Without all of the above I'd have trashed the thing two months ago. Hell, without askpapawinchester I never would have started writing Crowley to begin with, so bb you are the best.
Summary:It starts with a question, "Was it worth it?"

Samael never had much use for humans, until he finally met one. Never could he have imagined that the path he started down by falling in love would lead him to Hell and into the den of an angry creature with a plan.

In present time, we find the demons of Hell preparing to exit through the Gate once Azazel's chosen one has opened it. Crowley has a few preparations of his own to make however, and one of them includes talking one John Winchester down off the rack. If he decides to keep the man as a pet afterwards, well? Who's going to complain? He's got some time to kill before the apocalypse and a certain creature's plans come due. The human might just be interesting enough to keep him out of trouble. For a little while.