Cosmic Hobo is a gen Doctor Who anthology, a fanzine of the Second Doctor. It is photocopied, 8.5 x 11 and contains 75% Doctor Who coverage.

There were four finished issues, and a fifth one that was very nearly published.

This zine has two sister zines, a newsletter called Cosmic Hobo Times and one called The Troughton Recorder

Cosmic Hobo 2 was published in December 1986. It has art by Philip Crawley, Evelyn Farris (back cover), and Martin Proctor. 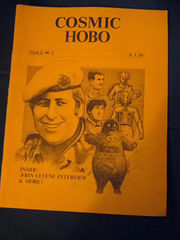 Cosmic Hobo 3 was published in 1988. This issue may contain "The Mines of Caddann" by Martin Proctor [1]

Cosmic Hobo No.5 would have seen print not very long after issue No. 4 (which had been published in June 1989) had everything gone according to plan. A great deal of the fifth issue was illustrated, typed-up and even laid-out, but the ‘zine soon ran into delays, and eventually ran aground about midway through 1991.

Presented here are some of the contents of that failed issue. While it is true that one should never judge a book by its cover, it would have been reflective of the change in content. I had hoped to imbue whole of the fifth issue with a more conscious and cohesive sense of design.

The cover originally started out in pen and ink, as with my previous covers, but part way along I decided to work in paint. The finished art would have seen Victoria flanked by images from Evil of the Daleks and Fury from the Deep, but after this length of time I can’t see the art ever being finished.

Although Cosmic Hobo No. 5 was officially shelved in 1991, I was still holding out a faint hope of reviving it as late as 1996, while working on an overly-ambitious collection of my work in fandom, to have been called CONNECT THE DOTS.

Basically Cosmic Hobo No.5 had the misfortune of being contrived at a time when all of the principal participants were finding their energies being pulled in too many different directions. As for CONNECT THE DOTS, it too went down in flames for similar reasons. Items include the cover, introduction art, contents page, Deborah Watling Interview, the conclusion of The Mind Robber, Cybercable (letters page), Incident at Reading Station by Liz Shaw (art mimicking Padget), Sword of Valor by Patti Johnston, The Androgum Inheritance by Anne Collins Smith.

While they didn’t ultimately see print in Cosmic Hobo, The Androgum Inheritance had already seen print in AD INFINITUM (I’m unsure of what issue) and Sword of Valor later saw print in October 1991 in QUI TO TIME – THE SECOND SEGMENT (with illustrations supplied by Barbara E Brown and a preceding drawing by Marti Kraus.

The cover for Cosmic Hobo No. 5 was begun in 1988 in pen and ink and then done in paint in Apr-May 1990. The interior art for Sword and Inheritance and Mind Robber was drawn in July-Aug 1990 and the remainder was done in Nov-Dec 1990.[2]