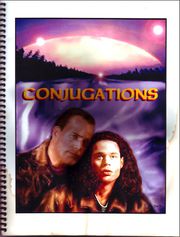 Conjugations is a slash 186-page Sentinel novel by Legion. Color cover and interior art by TACS. It is an alternate universe apocafic.

It was first printed in 2000 by AMC Press. In 2018, it was reissued in print and PDF by Requiem Publications.

From the distributor, "In a future post-apocalyptic society, Sentinel and Guide form a new tribe and try to survive in a world gone mad."

Introduction from the Author

"I had these friends, you see, who were getting married. I asked them what they wanted for a wedding present, and a split second later said to myself, 'duh! [T] and [L] are zine editors.' Sure enough, they wanted stories from me, and when I asked what kind, [T] told me she loved Alternate Universes.

I had already written Past Tense, Present Tense, and Future Tense, but it wasn't until I wrote Tense Times that I realized that the first three stories were connected, not just to themselves, but to about half a dozen others that were drifting around in my head.

I told [T] about those and she cheerfully claimed them all, and I just as cheerfully wrote Past Perfect, Present Perfect, and Future Perfect, but not in any particular order. She put them in Love & Guns, then asked me if I had any more in that universe because she wanted to devote an entire zine to them. So I wrote Changing Tenses and Past To Future. As I did I realized that so much time had passed, not only since I'd started writing them, but in that universe itself, that the stories needed something to connect them into a whole, so I wrote the 'framework story."

Words really can't describe how much I love this. I printed out all 230 pages, so that should give you some idea. [1]

Well, it is a sort of an AH, there is a plague, things deteriorate, and slowly end up in a sort of neo-tribal setting, but some people, among them Jim and Blair are still remembering the old times while adjusting to the new... First the positive things, it is a basically interesting SF premise, the initial idea for the plague and its immediate consequences is neat, the writing is overall sound, and it has a substantial plot, plus I like long stories, so it's well worth a rec, however I also had several problems with this one. First the past and future generations were woven together in a (at least to me) somewhat confusing way, and I had some problems with the later plot, especially the part where the (reborn?) Jim and Blair are fighting guttural speaking Russian hordes who come across the Pacific raping and pillaging the peaceful utopian North American tribes, which are living in harmony with nature, supposedly just because they don't have enough enough space and natural resources in all of Eurasia. And that even though with before the catastrophe probably even fewer of the people there had the anti-allergy medicine when the dying started, thus the death rate through all of the poorer regions must have been much higher than in the US, and those areas even more depopulated, and generations later North America is still mostly empty because of infertility and a collapsed birthrate... So at some point my suspension of disbelieve just snapped. If there are more detailed explanations, I want them to be more plausible.[2]

What if the world ended, and Jim and Blair had to take charge? Jim/Blair. An Apocalyptic AU, in which Jim and Blair’s skills come in useful for the survivors, and we see how their society changes and evolves to suit their new lives. Plus desperate, longing sex, where they need each other and can’t always have each other. Jim and Blair become Sentinel and Shaman, fitting into their new roles with the ease of being born for it. [3]

This is a post-cataclysm survival fic about how Jim and Blair lead a group of teenagers out of the city during the Chaos to form Tribes and start a new way of life. It's told in snippets that are woven together to create a compelling story. Survival!fic is one of my favorite genres, and this story is the best survival!fic I've seen in any Fandom. This fic really stands above any fandom, and you will enjoy it even if you've never heard of "The Sentinel" before. There is some pretty hot sex in here, but this story definitely has a plot. I really can't speak highly enough about this fic. It's Hot, it's got Plot.... what more can you want? Read it! [4]

This is a hell of a novel once you've read it about three times. This is an A/U set in the near future about the "end of the world as we know it." Society is pretty much falling apart, and a brave group of people are responsible for taking the few survivors out of Cascade, and making a new life for them in the wilderness.

I love Legion. She and Francesca are just about my all time favorites. But when she wrote this, she has some major imagination work going on! It is just hell to try and figure out the first time around. Damn good story, and once you have the freaking timeline down, it can make you a little weepy. But don't try and get it all in one sitting. You'll give yourself a migraine. My free advice for this one, (worth just what you pay for it) is to take it in chunks, and go very slowly. Make sure you don't miss anything. I am a very fast reader for the most part. I read about six hundred words a minute, and I'll tell you. I went back, and read this story over at about a quarter of my normal speed. There is one major detail in this that you need a definition for, as it's something Legion made up herself, and I'll tell you now. It's only defined once. Once in the whole damned novel, and it's an incredibly small, fleeting mention at that. I actually reached the point that I stopped reading the story, and went back through everything I'd read, and scanned all the pages. Not reading, just looking for the definition to this phrase, the way you pick out one letter, and scan for it in a word search puzzle.

This is a fascinating zine, and a wonderfully told story. I love the POV she's got it in; a very unique alternation between third person, and first person. But then. It's Legion. Unique is pretty well guaranteed. [5]

Conjugations is a slash novella by Legion. Published by AMC Press. This is a story about the survival of the tribe after an apocolyptic disaster. Legion describes the breakdown of society and all morals after this disaster. We see the slime of society come to power and try to control their own little kingdoms. Sentinel and Guide break away from this and create a new life for the tribe rescuing as many orphans and survivors as possible. They are forced to make new morals and codes to live by for the survival of the human race. Justice is swift and at times unforgiving. As Shaman and Guide, Blair is the backbone of the tribe. He and Jim teach the others how to survive in the wilderness. They are joined by several members of Major Crimes and they all face many trials and tribulations. We learn that Jim and Blair formed a connection spiritually at Blair's birth. Through this connection, Jim survives childhood and early adulthood. They struggle with their love and commitment to each other as it becomes painfully clear that a physical monogamous relationship is impossible. They must contribute to the gene pool. This creates a lot of angst. Both Jim and Blair suffer greatly until they realize that this is simply a role that Shaman and Sentinel must perform, but this does not touch the love and commitment of Jim and Blair.

The story continues to far into the future where another Shaman and Sentinel pair come together. Again angst abounds. I became confused briefly when this future was first being described, but it was quickly resolved. The future Jim and Blair suffer many misunderstandings and difficulties before they are finally brought together. There is a huge undercurrent of love flowing through the story. It also shows us that man has the capability to standup and overcome the atrocities that their fellow man performs. I came away feeling good about mankind and that goodness and justice can overcome evil and prejudice.

This story has romance, suspense, subterfuge, action, angst, and sadness (death of minor characters). We see jealousy, love, friendship and compassion throughout the story by many of the characters. I highly recommend this zine. I borrowed it, and will buy it for my collection.

The cover art is color and the interior art is black and white, all by TACS. There is one particular piece that is hot!!! It is a scene of Jim and Blair naked at a waterfall kissing. This zine is spiral bound and in columns. Very few typos were found and overall it flowed easily, even with the shifting of time views. [6]