The Communicator was a clubzine was published by the Star Trek fan club out of Michigan, US.

This zine published only art and non-fiction until issue #7 when it started publishing short stories. At that time, the club had 32 members, a tally that the editor notes was "down from a couple of years ago."

The first six issues were published by U.S.S. Antares, and then by U.S.S. Interphase by way of a club name change. From issue #7's editorial: "Since our last issue, we have changed our name to the U.S.S. INTERPHASE. This was done in order to avoid confusion with Star Fleet Academy Inc., also it seemed inappropriate since we are not an academic body. Along with the name change we altered our command structure to match that aboard ship."

The fan club that published "The Communicator" also published the newsletter Subspace Chatter, though the editor says this newsletter was very infrequent (translation: probably hardly ever).

The Communicator 1 was published in November 1985 and contains 70 pages. 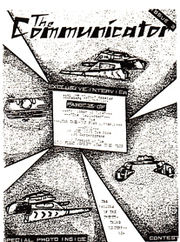 black and white copy of issue #3 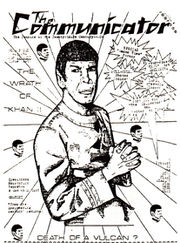 black and white copy of issue #4 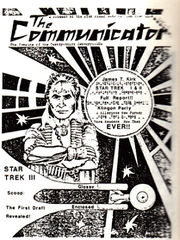 black and white copy of issue #5 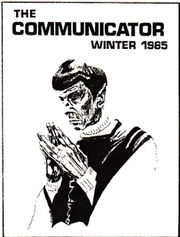 black and white copy of issue #6

The Communicator 6 was published in winter of 1985

The Communicator 7 was published in September 1985 and contains 50 pages. It has art by Rich Katuzin, Martin McClure, Alesia Hunley, Chet Carey. 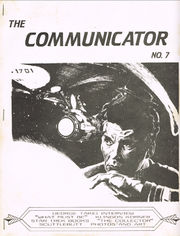 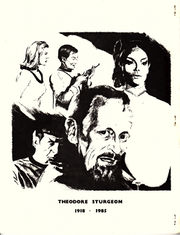 Communicator 7 is one of the most promising fan zines I've seen in some time. The artwork by Rich Katuzin and Martin McClure is among fandom's best. I intend to nominate both in the "best artist" category [for Fan Q] come January. The appearance and layout are very professional-looking; it is easy to read. Most of the contents are non-fiction articles which I found interesting.

The issue starts out with a list of Star Trek books. While not as comprehensive as the STW Directory list, it has the advantage of separating the books by category, which adds to its read ability. Next is a one-page reaction to the ST films from the Klingon point of view. This is followed by an article called "Scuttlebutt," which discusses rumors. I think the author of this entry should only promise to "discuss" rumors, not "clarify"them, because there is little actually done in the way of confirming or denying the rumors. Still, the comments are well-written. "Book Trek" discusses the James Blish adaptations. "Interphase Interview" is a long, well-done interview with George Takei. It includes clear photographs of the actor's appearance at a convention. "What Must Be" is the only story in the issue. It concerns the ENTERPRISE meeting a ship not in the Federation registry whose crew, nonetheless, seems to know all about the ENTERPRISE and claims to want to rescue it from a Klingon attack. I think the two lead female characters overwhelm Kirk, Spock, and McCoy a little too much for my tastes, and the danger is a bit hard to swallow—I wonder if the Klingons would really try that—but the plot wraps up fairly well.

The rest of the issue has short entries: puzzles, an episode review, part of a group written novel, and profiles of two of the club members. (Giving short biographies of the contributors seems to be a growing practice. I think this is a great idea.) [1] 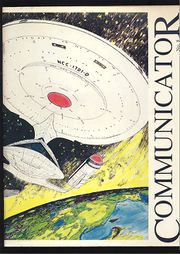 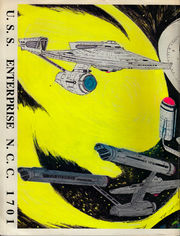 The Communicator 8 was published in Fall 1987 and was edited by Sue Uram. It contains 48 pages.

Communicator 8 is out, and features an excellent cover by Rich Katuzin. Inside are three stories, an interview with Nichelle Nichols, and various puzzles, poems, and cartoons. It is only 48 pages, but the price is $7, probably due to the color cover. "The Isosceles Experiment" by Debby Dunbar is a story in which the ENTERPRISE must get medical assistance to a colony within 24 hours. The only way to do this is to cross a hazardous area of space. The characterization is good, and the situation is interesting, but the lengthy discussions slow the story down somewhat. (The ship gets to the hazardous area, stops, and then they discuss how to get through it, rather than discussing it on the way.) 'Comparison' by Bill Brang is a nice change-of-pace story. It is set on the U.S.S. CHALLENGER, commanded by Capt. Peter Kirk, with Dr. Joanna McCoy as chief medical officer. Xon is science officer. The ship is sent to investigate a plague which the Romulans are suspected of starting. In the process of the investigation, they crew finds Saavik's mother. Those who wish for stories which do not involve the ST regulars should read this one. 'A Break in Routine' by Stephen Hoffner, has a very good set-up. The time is between the end of the five-year mission and the first movie. Admiral Kirk has an encounter with the "new humans." The situations are original and absorbing, but I thought the ending was a bit weak. However, the fresh approach is praiseworthy. [2]