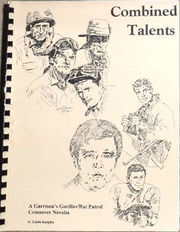 Combined Talents 1 was published in 1992 and contains 120 pages. It is a novel called "Combined Talents". Artwork by J.M. McClure. Summary from the publisher: "The Rats face capture and torture, division in their ranks, and the Gorillas must aid in the rescue. No one trusts anyone, so how can they work together? When Sergeant Sam Troy and Private Mark Hitchcock were both taken prisoner by Captain Hans Dietrich no one -- not even Dietrich -- could have possibly foreseen how far they would go together ... or that it would end up involving Garrison's Gorillas."

Combined Talents 2 was published in 1993 and contains 130 pages. It is a novel called "Unfriendly Acquaintances." Artwork by J.M. McClure. 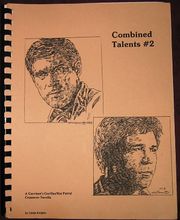 Summary from the publisher: "Col. Kevin Lerner, who hates Troy, helps complicate an assignment in Italy. Dietrich's presence complicates things further. By the time two months had passed, Sergeant Sam Troy had begun to feel that he'd probably always worked with Garrison's Gorillas. He was comfortable with the new -- enlarged -- team and growing to be content taking Lt. Garrison's orders. So, the appearance of an old enemy in their midst was a particularly unwelcome surprise -- one that no one would have expected to be solved the way it was. Sometimes, in the middle of a war, friends could well become enemies ... and even stranger, enemies could become friends."

Combined Talents 3 was published in September 1994 and contains 172 pages. It is a novel called "Brotherhood." Artwork by J.M. McClure. 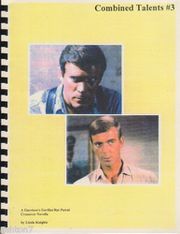 Summary from the publisher: "Old enemies were now working with the Garrison's Gorillas team. And the combined talents of ten experts at covert work made them successful. But it was not necessarily a smooth transition. So, when Sam Troy's brother David is shot down over France, and declared dead, it wasn't all that surprising that he ended up going rogue in his search for the truth. But what the pledge of brotherhood was about to cost the Gorillas none of them could have predicted -- most particularly Hans Dietrich."

Combined Talents 4 is undated and contains 166 pages. It is a novel that is a crossover with Highlander and Garrison's Gorillas called "Retribution" and includes the story "Winter Thoughts." 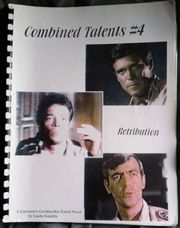 From an ad: "Continuing the adventures of the Combined Teams of Garrison's Gorillas and the Rat Patrol. The German Colonel Meinkein (ex-German Meinkein) had been bested by the Rat Patrol and Garrison's teams. He'd stood there and watched prisoners snatched from out of his prison camp, been tricked time and time again into believing he had them cornered (only to see them slip away) and despite having employed Dietrich's brother against him, had even been bested by the ex-panzer captain! He'd been embarrassed, disciplined and finally even demoted. The only thing that kept HIM out of a prison camp was his good family name. But one more series of mistakes would likely see him dead -- by the Fuhrer's hands. Meinkein was no fool, though. He'd learned from his previous mistakes. The way to beat the Combined Teams wasn't to fight them like soldiers but to take them on at their strength - the friendships that were binding them into such a cohesive team. He had the money. He had the connections. And God knew he had the will for vengeance!"

Combined Talents 5 is undated and contains 138 pages. It is a novel called "Tears of Allah." In it, the team goes back to North Africa to retrieve a hidden stash of German information and diamonds. 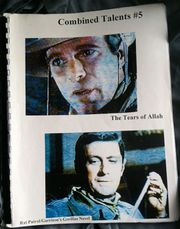 From an ad: "It seemed like a mission made-to-order for the new combined teams of Garrison's Gorillas and the Rat Patrol - go back to North Africa to retrieve a hidden stash of German information and diamonds. A walk in the park ... ? Okay, maybe a little more than that. They'd have the heat, the desert and the hellish Jebel Akhdarto fight their way through. Still, it would have been one of their easier assignments ...only Sergeant Sam Troy wasn't about to willingly walk back into the Akhdar. The last time fate had forced him into that hellish set of mountain passes he'd very nearly lost his soul - and his life. This time he was sure it would cost him both!") 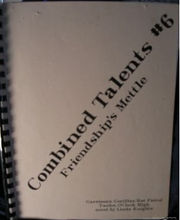 Combined Talents 6 was published in 1996 and contains 110 pages. It is a novel that is a crossover with Twelve O'Clock High called "Friendship's Mettle." It won a 1997 FanQ.

In it, General Savage is shot down and declared KIA, but Sgt. Komansky enlists the combined teams to find him. 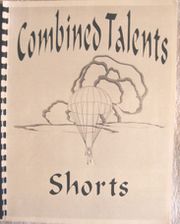 cover of the special issue

Combined Talents Shorts was published in November 2000, contains 62 pages, and is an anthology. It contains one explicit het story. In it, the two teams work together in this series of shorts that falls generally after the Combined Talents novel.