You may be looking for Children of the Darkness, a Beauty and the Beast zine.

Children of Darkness is a 69-page Doctor Who novel by Althea Fleming. 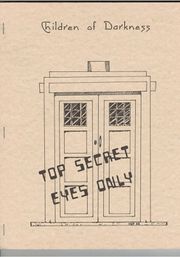 "Trapped in a reality that separates his mind from his body, the Doctor fights to save the Time Lords from a 'plague.' and he tumbles into a war between two pre-Time Lord societies a million years before Rassilon." [1]

Children of Darkness is an interesting tale which touches on Gallifreyan society and the telepathic abilities of the Time Lords, a subject rarely referred to in the TV series. The story involves a strange 'plague' which separates mind from body. The Doctor spends most of the time in this strange state, which does nothing for Peri's nerves. The story trots along at a steady pace, with some good dialogue and intriguing imagery. I liked the way Leela was brought in, although she disappeared a little too rapidly. I also thought the end was too quick, without much emphasis on why or how Mayoo managed to turn against her captor. Some sort of explanation to tie all the threads together was needed, but that's a minor quibble. Children of Darkness is not only a good read, it's also ecologically sound - printed on recycled paper. Just one complaint - it's the wrong Doctor... [2]