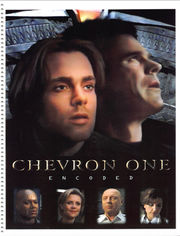 The cover art is by Gayle.

Well, it's finally here, thanks to the extraordinary efforts of some really great people. My deepest gratitude goes to each and every contributorto this anthology: they were more than patient with my scattershot approach to zine publishing. I think it goes without saying that without the readers, there would be little point to this endeavor, and so Chevron One Encoded is dedicated to Stargate slashfen everywhere.

Of course, I could never have pulled it off at all if it hadn't been for Arduinna Finn, the Proofreader of the Gods. Obviously, any errors that remain in the text are the fault of my own fumble-fingeredness and shouldn't reflect on either Arduinna or the authors.

I've tried to keep spellings and series-specific conventions consistent, but it's a difficult job with the interesting "diversity" that I've found in official sources. For those who are interested, the sources I used were the two official Stargate sites {www.sg-l.net and www.stargatesg-l.com') and the text on the DVD case. In instances where the sources confliced, I made an executive decision.

Finally, though I dislike the trend towards mandatory fiction warnings, those who want them will find them at the back of the zine, printed upside down.