Are you looking for the Avengers story Catch a Falling Star? 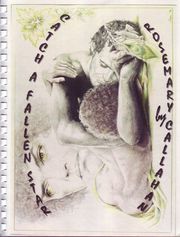 cover by Suzan Lovett, the full-sized "Green Peace" is here. A fan in 2010 said: "Another SL Cover that I desperately want to frame and display for all the world to see." [1]

Catch a Fallen Star is a 170-page slash Professionals novel by Rosemary C.

The zine won a 2004 SCREWZ Award for Best Novel.

Suzan Lovett is the artist. A single print of the art used on the cover ("Green Peace") which shows Doyle and Bodie enmeshed in an embrace, sold at the 1997 Zebracon art auction for $630. It also won "Best Art in Show" at the 1996 Friscon art show.

The Hatstand summary: "A Bodie/Doyle novel set in the CI5 world, but with Bodie and Doyle mostly outside the organisation. After Bodie rescues Doyle from an abusive captor, he devotes the rest of his life to protecting and healing Doyle, which includes whisking him away to an idyllic hideaway in the Swiss Alps. A major hurt/comfort novel with Doyle as the hurtee." [3]

As a Print Zine, As an Online Story

In 2006 at Crack Van, there was an interesting exchange among several fans regarding their reading habits.

Metabolick said: "I've been in the fandom for about a year and a half now and I hadn't heard of it either. This story has gone on my list of favorites." [4]

gilda elise said: "Hm, maybe because I tend to be more zine-oriented, I figured more people knew about it then did, though I've seen it mentioned often. Anyway, I'm glad you liked it so much; it's a true classic, imo." [5]

rach74 said: "I'd not heard of it until it came across one of the lj communities a day or so before it was recced here. I am pretty much an online fic afficiendo! Thanks for reccing it because it is a simply amazing fic :)" [6]

gilda elise said: "You're welcome. :-) I'm very much the reverse, reading zines before getting to the on-line stories. But reccing for the Van sort of forces me to get more into the net stories. Of course, a lot of them, like this one, were published in a zine first, making them old friends." [7]

After Doyle is captured, Bodie refuses to believe that he is dead and leaves CI5 to hunt for him. This is a well crafted story that slowly uncovers both the strengths and weaknesses of both men and the way that they rely very strongly on each other.[8]

This is a very angsty novel, as you might expect given the premise. Doyle is indeed still alive, but has been abused so badly that Bodie fears for his partner's sanity. Following their escape from Doyle's captors, the story deals with the way Bodie copes with not only Doyle, but his own emotions, and the love that he has felt all along for Ray, which he had successfully repressed in the name of their partnership. I found this a well-written, compelling story that drew me in from the first, and held my attention until the very end. If I felt the occasional sense of deja vu at some of the hurt/comfort scenes it didn't last long enough to throw me out of the fic, and could be explained away as a part of the long and necessarily repetitive recovery process. There are some scattered Americanisms, but I did want to finish the story badly enough that I suffered them in relative silence! I believe that the original zine was illustrated with three pieces of artwork by Suzan Lovatt that are also archived at the Circuit Archive. Overall I found this an enjoyable read, with a satisfying conclusion, and am happy to recommend it! [9]

I can't imagine there's too many Pros fans that haven't heard of this story. But it's only recently been made available for net readers, for so long only available in zine form. Not reccing it wasn't to be imagined. There's everything I love in a Pros story here: great characterization, a long, involved plot, and a love between the lads that's so sweet yet strong enough to see them through the worst of circumstances. Both men are portrayed the way I like them best; their faults are more than apparent but their finer qualities more than make up for them. And not only do you get the story, but the beautiful Suzan Lovett illo that went with it, plus the two companion pieces. I can't recommend the story enough.[10]

Thank you for rec'ing this story. I'm one of the few Pros fans who hadn't heard of it, and the opportunity to read it was wonderful. Also, thank you for reminding me of how much I like this fandom - it's been awhile since I've done any reading in Pros, and I'd forgotten just how much I love the fandom and this pairing.[11]

This story could have gone wrong in so many ways. Rosemary tells a tale about a Doyle who has been kidnapped and abused physically, psychologically, and sexually for months. No sign of him has been found by CI5, so common wisdom dictates Ray is dead. Only Bodie doesn't believe that. He becomes obsessed with getting Ray back, and succeeds, only to find the shell of a person he has rescued is nothing like the Doyle he remembers. So he sets out to try and make that right too.

I told Rosemary, when I wrote her a note of feedback, that I'd actively avoided this story for months because, going by the plot synopsis alone, I'd feared the story was going to be either a clinical how-to on bringing a person back from the edge, a pornographic revelling in the abuse Ray had suffered, or an opportunity to turn Ray into an utter basket case because of what's been done to him.

It's none of those things. Rosemary worked a miracle and kept the boys in character, let Ray retain buckets of his essential self and showed Bodie as a man so utterly devoted to his partner, he was willing to turn his life upside down and inside out to save him. Wonderful, wonderful read.[12]

Oh, [Ray needing comfort, Bodie providing it is] *totally* my kink. Totally. The only caveat I'd put on that is that I don't like Ray to be a basketcase or feminized when he's hurt. I want him feisty and strong. That's one of the reasons why I enjoyed Catch a Fallen Star so much. I was so pleasantly surprised by the way Rosemary let poor traumatized Ray comfort and stand up for Bodie in places. It wasn't all one-sided. I also loved how very difficult Ray was when he was healing. His behavior let me remember it was him and not some anonymous victim.[13]