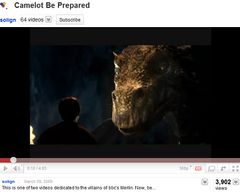 The Great Dragon telling Merlin about his plans.

Camelot Be Prepared is a Merlin vid by solign (4:03 min). It has the subtitle Camelot' Villains, part 1....

The Great Dragon is the leader of Camelot's villains and wants to be king. He is also the narrator of the vid -- featuring some great lip synching -- and tells everyone to prepare for Uther's death. Most of the villains from season 1 appear, including Morgana and Merlin.

Vidding notes: "This is one of two videos dedicated to the villains of bbc's Merlin. Now, before any of you say anything, I am more than well aware that Merlin is not evil. His appearance in this video is just to highlight the fact that he recognises what a benefit to him it would be to have Uther dead, although, we all know he would never do it himself..."