CONverge was a multi-fandom slash convention that was held on June 24-27, 2004 in Anaheim, CA. 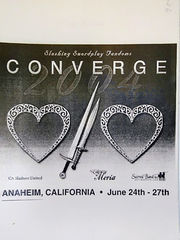 front page of the program book 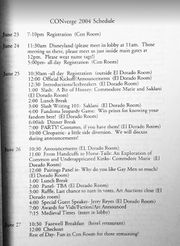 The focus was "swordplay fandoms."

Welcome to CONverge, the convention that aims to bring you almost anything and everything slashy! Here any slash from a fandom featuring swords may find its welcome. That includes Pirates of the Caribbean, Lord of the Rings, Harry Potter, Hercules, Highlander, Master & Commander, Troy and more. We also welcome RPS and Femslash.[1]

The four con organizers were Mirza (who did not attend), Shelly, CommodoreMarie, and Saklani, who said that this con was first envisioned during a long conversation into the night in Vermont.

The special guest was Jerry Reyes, an actor who played Tearlach, a member of Jack's crew, in Pirates of the Caribbean: The Curse of the Black Pearl[2]

The con zine and the program book were combined.