From Fanlore
< Bruce Banner(Redirected from Bruce/Betty)
Jump to: navigation, search

Betty/Bruce is a canon het pairing of Bruce Banner (Hulk) and Betty Ross (Red She-Hulk) in the Marvel Comics.

In Earth-616 of the comics, Betty and Bruce were married for a time before her "death". Betty is generally the current or past girlfriend/love of Bruce in the various universes.

Betty/Bruce is a popular pairing in the Marvel Comics universe. In other universe, Marvel Cinematic Universe and other Hulk-related fandoms, Betty/Bruce is a more canon pairing.

The pairing particularly became popular in The Incredible Hulk film, and it still appears within The Avengers Movieverse fandom as a past relationship or current where Betty joins Bruce and the team. 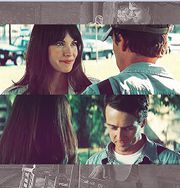