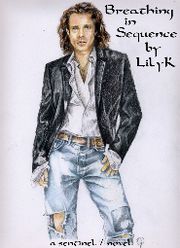 Breathing in Sequence is a 234-page slash Sentinel novel by LilyK. Color cover and B/W & Color Interior art by K9.

Summary: Jim's presence looms large in Blair's life as they learn to live and work together. He's Blair's best friend, roommate and partner... and he's also the center of Blair's dream world.

"It happened again. Blair woke, confused and startled. Another dream? What was wrong with him? Was he falling apart so soon after hooking up with Jim? Did the idea of shadowing a cop frighten him that much? He considered this thought for a while before he admitted to himself that Jim being a cop didn't scare him at all. In fact, he found it exciting. Maybe he really was going nuts.

Oh, well. Two dreams didn't a mental case make, he figured sarcastically. Still, he couldn't help but examine why he was having these kinds of dreams about his new friend in the first place. Jim hadn't given him any hints that he was the least bit interested in him in the physical sense at all. As far as Blair could tell, Jim didn't think of him as anything but someone to help him learn to control his senses. He had no idea if his new partner was gay or straight, and it certainly wasn't his business to ask. Yet yesterday had turned out to be another harrowing day in the life of Jim Ellison, and by extension, in the life of Blair Sandburg. Something must be dredging up these feelings. And he wanted to know why."