Book of Travels is marketed as a "serene online RPG" and "a unique social roleplaying experience that doesn’t hold your hand." It involves beautiful hand-painted settings and a "TMORPG" (Tiny Multiplayer Online RPG) approach: Each game server only allows 7 players at a time. Early access was plagued by server problems (despite the 6000+ backers of the game on Kickstarter, the creators did not expect over 1000 people to try to play at the same time) and bugs (like "instead of walking, character is just teleporting to each spot I touch on the screen"), but player reactions were mostly positive.

The game takes place in "The Braided Shore," a world that uses a knot-based written language. At the beginning of the early access stage, only a small portion of the world was available for play.

The game was released almost a year later than its expected Kickstarter fulfillment date. However, there is a good chance this was as much due to COVID shutdowns as any poor planning on the part of the dev team.

Many players complained about permadeath being implemented before the "afterlife" features were fully released, especially since it was possible to be killed by bugs. The mods, while still insisting they want "to have death play a role to give our game the sense of tension," decided to remove permadeath during part of early access.[1]

Gameplay is mostly slow, and involves a lot of gathering flowers and other reagents for spells & special abilities, and amassing better equipment and trade goods. There is no in-game currency, so all objects are potential barter resources with NPCs. 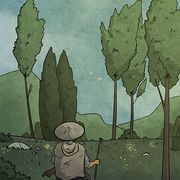 After getting their bearings, many players settle into a grind of searching for "knot of thankful wishes," because there is one vendor, Resna, who takes almost nothing else in trade. Her most powerful item takes almost 1400 of them. Players disagree on the best/fastest way to collect "thankful knots," with the main split being between "combat with kettems" (giant treelike creatures) or "master-iron cog trades," which earn 20 knots at a time - but the cogs are very expensive. A third method is a trade route between the major cities, gathering items in one that can be traded for TKs in another. This is slower, but less stressful.

Players are also split on the best way to gather wealth. "Combat" is one, as the major creatures drop expensive loot. "Fishing" is the other - a slow but low-risk, guaranteed-profit method. After several hours of fishing, almost all fish caught are high-value and can be traded for the much-desired Master Iron Cogs (or indeed, almost anything else - except Resna's gear).

Some players put together maps of the world - while there is an official map, it's not very clear about how the different regions are connected. And there is a solid community of helping new players, because the game's "doesn't hold your hand" approach means there are only very limited explanations in-game, and the tutorials are weak or nonexistent. So players try to answer questions like "Where do I go to deliver the thing for this NPC" or "I have a warning that I'm hungry; where do I get cheap food?"

Spoiler tags are common in the Discord, as players try to answer questions without ruining the surprises for everyone else. Gameplay styles are split between "don't tell me anything; I want to wander the world and discover things for myself" and "tell me everything so I can go get the good stuff and do the fun activities ASAP."

Right away, fans started creating complex character background stories, fanart, and crafts projects, most of which were only shared on the company Discord.