Blind Spot is a set of two slash Kung Fu novels by Elizabeth Stuart and Virginia Grant. Cover art is by Zyene. 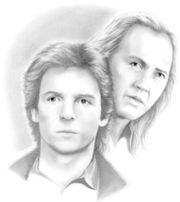 cover of volume #1 by Zyene

Summary from the zine flyer: "This is a novel of deep, passionate love and an overwhelming obsession between Peter Caine and his father. This forbidden love leads them on a tortuous path toward happiness."

Summary from the zine flyer: "The forbidden passion of Peter and Caine takes them to San Francisco, where they face new temptations and the threat of exposure."

The fandom in this case is Kung Fu: The Legend Continues - not a show I am familiar with at all - and the pairing is generally known as Pop/Peter - in other words Shaolin Master Kwai Chang Caine and his son Peter. I was intrigued by the idea. Father/son incest is not particularly common in slash fandom although it is becoming easier to find. (My own Indy/Henry series 'Indiana Jones and the Last Taboo' now appears on the web and will also be in print for the first time, and there also some Luke/Vader stories on Elizabeth's website and in related publications.) Blind Spot shows signs of having evolved in much the same way as the story cycles which appear on the website, notably the 'Love's Path' series and the splendidly named 'Poppycock' stories. That is to say, the story is episodic and there is no evidence of coherent overall plot or structure. This is not to suggest it is badly written - very far from it, in fact - but that it does get slightly repetitive after awhile.

Pop (Kwai Chang) realises that his son's feelings are more intense than is usual between father and son; he knows that Peter is sexually attracted to him and decides (an odd decision in the circumstances?) to teach him a lesson by giving him what he desires. Pop thinks he can control the situation and gradually wean Peter from his craving. No such luck. Instead of freeing Peter from the emotional vortex, Pop gets sucked into it - quite literally. The sex is graphic and beautifully described but it is just about endless. I haven't yet gone through and counted the number of earth-shattering climaxes these guys rack up - including the one Peter has with a nameless blonde girl while his dad is watching - but it's no wonder Peter loses weight and his friends are worried about his health. There are some fascinating aspects to this relationship described in Blind Spot. For example, Peter wants them to be seen together as real gay couple and they appear in that character before some acquaintances of Peter's fellow detective Kermit Griffin (storing up trouble for the future here, I suspect) and later at a gay bar where they are able to dance together. There is also distinct element of S/M creeping in towards the end; Peter is beginning to relish the more violent aspect of his father's lovemaking and to have dark fantasies about being dominated by him (This ties in with a consistent theme in other zines produced by the same press.)

On the whole I'm glad I bought this zine and I enjoyed reading it, but there are some disquieting aspects to it. There are several long sequences where the characters speak of themselves in the third person, which comes over slightly strangely. ("Peter wants his father to fuck him." "Peter's father wants that, too." That kind of thing.) Also the story line is a bit like a cream cake; very enjoyable if you haven't had one in a long time, but a constant diet of cream cakes would soon be too much. As for technical aspects of presentation, the zine looks nice and is clearly readable and well-bound and I consider it to be acceptable value foe money although I could wish it had been proof-read with rather more care. [1]