Blind Fool is a Kirk/Spock story by Kay Wells. 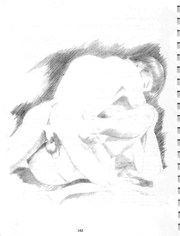 art for this story by Kay Wells

It was published in the print zine First Time #23.

"When McCoy sends a new officer on the Enterprise-A to talk to Kirk about the price of command, Kirk realizes the price he himself has payed."

"Does Spock know this information is in the computer?" Kirk asked, a real fear beginning to show in his eyes, and a knot forming in his throat. "Of course," McCoy blurted. "He was instrumental in obtaining it after . . . . " Kirk's stricken look jolted the doctor into revealing the last bit of information in a more compassionate tone. "It was only through Spock's insistence probably with a little help from Ambassador Sarek and Admiral Sarnin that it was made available to command personnel and not just doctors." "That was " The stark realization hit Kirk, cutting off his words in mid-sentence. A stabbing pain gripped his stomach and he suddenly felt very alone and very old. "That was for my benefit," he started again. "He was hoping I'd see it twenty years ago." He hung his head but not before McCoy had seen the pain in his eyes. "Jim." The doctor spoke softly. "He's never rebonded. There haven't even been any pre-bonding arrangements made with anyone."

Often when I read one of Ms. Wells' stories I think, why didn't I think of that? This story is one of those cases — where the action seems so obvious and so natural. Her handling is, as always, excellent, and I enjoyed this story very much. I did feel that a mention of the young Lt. Commander and his decision at the end would have tied things up a little neater. [1]

Kirk becomes aware of Spock's feelings toward him by a young alien lieutenant bound for captaincy. The alien (described as young, handsome and with gills) tells Kirk that he too wants it all—a career and a companion like Spock. The alien lieutenant character is almost unnecessary as the biggest blow comes later when Kirk finds out that Spock has been in love with him for twenty-some years. A beautiful scene occurs when they are first together and they reveal their love. I just adore this kind of talk— "I will seek you out," the Vulcan warned, his voice becoming husky with his waning control and arousal. "I will have no one else." And stuff like: "Touch me all over." [2]

A misconception carried over the years coupled with a vision of an elder Kirk and Spock forms the basis of this very attractive story. It appeals as much now as when I first read it. One of Kay’s best. [3]

Even when Kay Wells writes a short, insubstantial story, there is usually something of interest in it. Blind Fool has an ambitious young commander on board, rotating among the various Enterprise departments to prepare him for a command of his own. It’s possible that Da’id Edwards will achieve command of a starship even faster than Kirk did, he is so talented, but there is a hitch. He is also in love, and formally joining with his lover might possibly slow his advancement through the ranks. (Cleverly, the author never tells us the sex of that lover!)

Edwards goes to Kirk for advice, because he thinks Kirk has had it all: a successful career with his chosen companion by his side. “You have it all, you and Captain Spock,” (Edwards) said defensively. Kirk shot upright. “Whoa,” he said, motioning Edwards to silence. “Let’s get a few things straight. I guess I didn’t realize just how seriously everyone seems to take that old rumor. I thought it had died a natural death years ago.... Captain Spock and I are not... companions,” he said quietly. “At least not in the manner you’re assuming.” Yes, this is a much older Kirk and Spock, as the author often writes them. Turns out Kirk has never seen some information put into the computer indicating that, yes, Vulcans could, information that might lead him to believe that, yes, Spock would be happy to! There is one very lovely line that I can’t help but quote here. Towards the end of the story, Kirk and Spock are talking, opening all their thoughts and emotions, and there is this exchange: “...I can’t imagine anyone going his whole life without love, especially someone who deserves it as much as you, my gentle friend.” “I am not without love, Jim, only without...sex.”

Sorry, that reduces me to a puddle every time. I just love Spock indicating that the relationship he and Kirk have shared for years, platonic though it might have been, was still suffused with love. Yes! It’s a good argument, in my opinion, for them taking that last step into sexual intimacy, since the actual dynamics of their relationship vis a vis Starfleet and their responsibilities will change very little. [4]