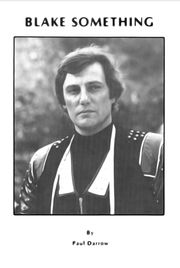 Blake Something is a 12-page digest-sized zine by Paul Darrow, the actor who played Kerr Avon. It was published for the 1987 Creation Con.

Its content is commentary by Paul Darrow about how he was hired to play the part of Avon.

There is a "zine review" of it in The Avon Club Newsletter #32 by Judith M. Seaman titled "Mercutio, Mercutio! Wherefore Art Thou...?" which is a reference to Darrow's comments in the zine:

Three months passed [since my audition] and I didn't hear a word.

The management of 'Romeo and Juliet' wanted an answer from me. Should I play Mercutio or take a chance and hope 'Blake's Seven' would be offered?

Contrary to many opinions, actors are pretty much like anybody else. They have to eat, pay the rent, buy dog licenses.

My wife said, "If Avon is as good a part as you say it is, it's worth waiting for. Mercutio you can play some other time."