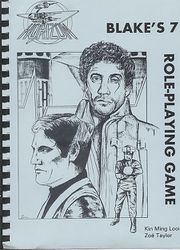 The game was created by Kin Ming Looi and Zoe Taylor for Horizon and included "complete rules, scenario, etc..."

Interview with the Creators

Now for those who know and enjoy Blake’s 7 along with those who are interested (or those who read the first review and wanted to jump out the nearest airlock without an EVA suit) here is my follow up review to the Blake’s 7 RPG, featuring a slightly less tired author and greater clarity.

LAYOUT: The book is divided into 14 sections, covering: Characters, Skills, Careers, Tasks And Skill Use, Personal Combat, Wounds And Injuries, Stress, Psionics, Space Combat, Worlds, Non-Player Characters, Refereeing, Equipment and Scenarios in addition to the introduction material. The book is 104 pages plus character sheets, the table of contents and is spiral bound with a soft card cover.

ARTWORK: The drawings and illustrations throughout are largely fan donated works and range from great to sub-standard and even hard to see. To its credit this is actually not as bad as it sounds, with may of the illustrations looking very sharp and accurate. In particular the weapons and ship drawings are among the best of the works with a handful of character drawings. Most of the less attractive artwork is fan based character portraits.

OVERALL CONTENT: For it’s size, the Blake’s 7 RPG core book, is adequate in delivering enough material to deliver a great game for the fans. For less initiated gamers, it will prove to be somewhat lacking. For instance, the chapter on Worlds does not deliver any detail on any of the fantastic places encountered in the TV series. Instead you are presented with a list of tables and options for generating your own worlds. This alone will not satisfy many gamers. Then there is the proliferation of equipment, weapons and drug descriptions which combined with all the brief tables give the reader the impression that this game is mostly centered around the conflict amongst the players and with other possible NPC’s. This is backed up by the other more lengthy chapters such as Personal Combat, Wounds and Injuries, Space Combat and Stress, which are given much more attention to detail than chapters like Psionics and Worlds for example.

CONCLUSION: The Blake’s 7 RPG is clearly a work in progress that will hopefully be expanded upon as fans become aware of it’s existence. For the Blake’s 7 fan, this game will prove to be most acceptable and enjoyable. The more seasoned gamers may enjoy the challenge of filling in the blanks that the book leaves, however it is not a book that can be recommended to gamers not familiar with Blake’s 7.

While many gamers will want more, this game presents a great starting point and is far beyond other brief attempts such as this one: http://www.geocities.com/simonwashbourne/blakes7.html

A final point to be made is that Blake’s 7 was largely about the conflict between people and ourselves, so it’s no surprise that the writers of this game paid more attention to areas that deal with combat etc, however with imagination and the entire Blake’s 7 TV series to work with, there is an endless number of scenarios and campaigns that could be played and to start you off the book provides a handful of these.