You may be looking for Bittersweet, a Sentinel zine. 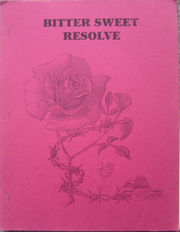 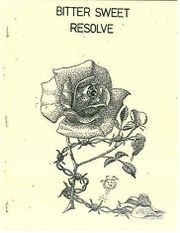 Bitter Sweet Resolve is a 69-page slash K/S novel by Karen Humphries. It is the last part of a trilogy. It was edited by Sue Chamberlain. The art by J.D. Tribble.

Betrayed and rejected, Kirk's life is a series of continuing agonies and heartbreak. Thrown into a dire situation over which he had no control, he faced further conflict. Battling to have a say over his own future, he knew far more than his own survival and sanity were at risk.[1]

This zine is a continuation of TWISTED LABYRINTH which left Kirk on the planet Samolia after being issued an ultimatum by Spock. At first, it appears that Kirk must ahve voluntarily decided to remain with his lover, Dan-eth, rather than return to Captain Spock but this proves to be inaccurate. Dan'eth has kept Kirk with him by force and despite the human's telepathic cries to Spock finds himself stranded against his will. Although he is eventually rescued, Spock refuses to see him, notwithstanding McCoy's insistent diatribe: "'I thought Jim Kirk was somebody special to you. Was I wrong? Were you lying to me when you told me of your feelings for him?'" Kirk is likewise equally insistent that he does not wish to see Spock since he is convinced Spock did not bother to reply to his pleas for help. However, as Sarek points out: "'My son introduced you to me as his destinare d'habere, which means he would refuse to take a substitute in your place. By refusing this bond, you condemn him to a death sentence!'"

Finally the two meet, only to mate violently with Spock accusing Kirk of allowing Dan'eth to take him. The troubles between the two are temporarily submerged into a sub-plot when Spock's mother is kidnapped and Spock enters pon farr. The description of pon farr gravitates between an almost sadistic cruelty and a contradictory bitter sweet tenderness, but eventually Kirk's initial reluctance is overcome and the two are bonded. Together they help Sarek to find his wife and overcome the kidnapper.

I preferred this zine to its predecessor, even if the main plot is basically well-worn and uninventive. However, of the three in the series, my favourite remains the first which appeared to maintain more balance between protagonists and a greater consistency in characterisation. Sadly, as in films, sequels do not always live up to the original.[2]

Kirk wasn't able to return because Daneth had made him unconscious. Then Daneth rapes him, Spock has put up his shields and does not receive Kirk's mental cry for help.

After Kirk has been found by another starship they are together again, but their difficulties are not over yet. Kirk blames Spock that he ignored his call for help and Spock is angry because Kirk didn't call for him. Spock is jealous when he hears about Daneth and in his desperation to claim Kirk again he rapes him. Kirk can't deal with that third rape in short time. He wants to leave Spock definitely. But when Spock goes into Pon Farr he decides to stay to save his life. In the meantime Amanda and TPring's daughter are kidnapped. Kirk manages to bring them back and to come to terms with Spock.

The story is intriguing in itself. The plot is good and well written, I like the way Sarek and Amanda are pictured, like the other Vulcans. TPring and Stonn are not the bad ones they are in many stories. The main problem I have with this story is the characterization of Kirk and Spock. In part one, Tangled Web, this is not so obvious yet. Kirk is a young cadet and Spock a starship captain and that explains a lot. But in Twisted Labyrinth and especially in Bittersweet Resolve Spock becomes more and more authoritarian, aggressive and violent and that is so totally different from 'our* Spock that I had difficulties dealing with that Kirk is weak and rather indecisive and impulsive. He reacts often as a little boy instead of an adult man. But he is not the starship captain here. He considers his position as Spock's lover and has problems to give up the masculine image to give in to Spock. His impulsive nature always brings him into trouble.

If you read not too critically, this is an Interesting story and worth the read.[3]