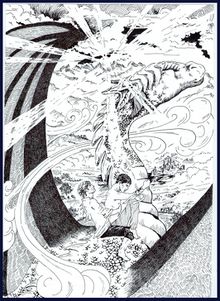 Riding Kilgharrah (2011) by itzcoatl, illustration for Before Dawn.

Before Dawn is a Merlin/Arthur Canon AU by lolafeist. The author's notes say that this fic started as a discarded attempt during Summer Pornathon.[1]

Summary: When Arthur stops his father's men from abusing a Druid captive, he sets into motion a chain of events that will bring him face to face with his destiny.

itzcoatl made two illustrations for the story. Merlin Bound shows a bruised and captured Merlin, bound to a tree, and Riding Kilgharrah shows Merlin and Arthur riding on the back of the Great Dragon.