Beautiful Cinnamon Roll Too Good For This World, Too Pure

Beautiful Cinnamon Roll Too Good For This World, Too Pure is the headline of an article on The Onion from January 23, 2014.[1] According to Know Your Meme, a screenshot of this headline was posted by Tumblr user renmorris next to a picture of Dale Cooper from Twin Peaks on January 24, 2014.[2]

The meme quickly spread and the headline has been used by Tumblr to describe characters and persons who are generally adorable, lovable, charismatic, or otherwise sympathetic, including Misha Collins, Felicity Smoak, Sansa Stark, and Chris Evans. The meme is now so widespread that simply "Cinnamon Roll" generally conveys the concept, and the whole headline doesn't need to be repeated.

After prolonged use of the meme, opinion on it has shifted somewhat. Many consider the label cringey when it is used for evil characters. 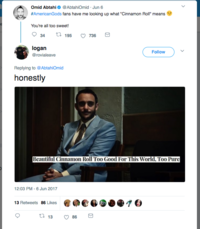 The meme was later developed into four phrases to be applied to characters:

Sometimes sinnamon roll is a fifth option. The first post using this format in the "cinnamon roll" tag on Tumblr was on July 24, 2015.[3]

A sinnamon roll is a person who appears to be a Cinnamon Roll but who is not in fact innocent. The first use of the "sinnamon roll" tag on Tumblr is from January 2015, but the tag didn't pick up until late May/early June.[5]