Batman Oral Sex Ban is an overnight fandom of fics and memes that started on June 14, 2021, after Justin Halpern and Patrick Schumacker, two of the co-creators and executive producers of the adult animated series Harley Quinn, were interviewed by Variety:

“It’s incredibly gratifying and free to be using characters that are considered villains because you just have so much more leeway,” says Halpern. “A perfect example of that is in this third season of ‘Harley’ [when] we had a moment where Batman was going down on Catwoman. And DC was like, ‘You can’t do that. You absolutely cannot do that.’ They’re like, ‘Heroes don’t do that.’ So, we said, ‘Are you saying heroes are just selfish lovers?’ They were like, ‘No, it’s that we sell consumer toys for heroes. It’s hard to sell a toy if Batman is also going down on someone.’”

The idea that DC doesn't want Batman to give oral sex to Catwoman caused a strong reaction in fandom, with 'Heroes don’t do that' quickly turning into a catchphrase.

Batman Begins but none of his ladies finish [2]

After news broke about DC's stance about Bruce Wayne and oral sex, a large conversation about it took place on Twitter. This is a sample of some of the tweets shared. 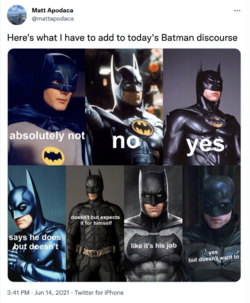 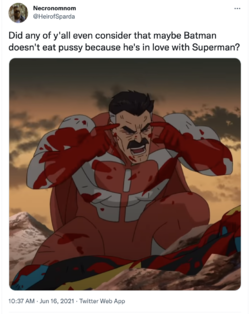 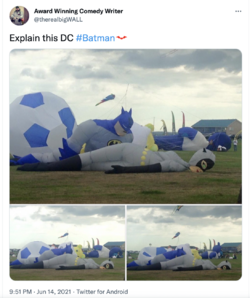 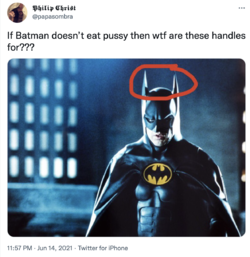 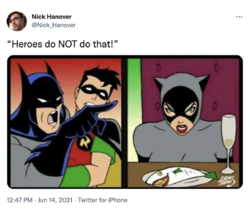 An essay by Emmet Asher-Perrin, titled Okay, Do Superheroes Bone or Not? appeared on Tor.com on June 15, 2021, drawing over 60 comments in response.

Many synonym tags for the canonical tag make reference to the ban.