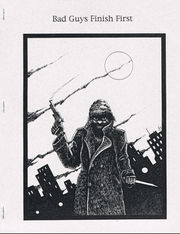 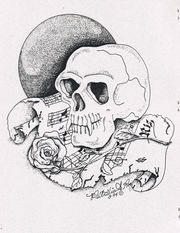 back cover by Patricia Roe

"For the people who cheer the so-called 'Bad Guys'."

The front cover is by Peter Francis, the back by Patricia A. Roe.

Hello and welcome to the realm of bad guys!

This zine has been an idea of mine for a couple of years, and a baby of mine for nearly as long. (All it's missing is the 2 a.m. feeding and the diaper changes ~ though on occasion I have worried that it stinks. I am now convinced otherwise.)

I had the idea for the zine after I watched Hollywood's "Prince of Thieves" and found myself cheering on George, the Sheriff of Nottingham, more than Robin, the supposed hero. After Robin won in the end, I was of course very disappointed, and felt that the Sheriff should have another chance. Isn't is just George's luck that the zine inspired by him should have no stories about him. (And in case you are wondering: yes, his name was George. Watch his wedding scene again if you require proof.) 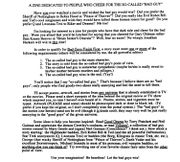 flyer for a second issue, which was likely not published

This is my first time editing a fanzine, and I think it's turned out beautifully. I've managed to jam-pack the thing full of great stories, creepy poems, gorgeous pictures, and funny cartoons. I warn you, however, some of them are not for the faint of heart! Read them at your own risk! Most of the stories revolve around original characters whom the authors have dreamt up to haunt you, though the odd one is based on characters from TV or movies. I hope you enjoy reading them as much as I have enjoyed putting them together.

In fact, I had so much fun editing this zine that I've decided to do a sequel! BGFF 2 will be coming out whenever I have enough stories, poems, and artwork to print it up! (Probably another year or so.) The catch is that this time I want the whole thing to be about evil characters on TV or in the movies!

1 hope this zine makes you think about who society generally considers to be the 'bad guys', and to reconsider whether they really are or not. if nothing else, I hope BGFF makes you laugh a little, cringe a little, and have nightmares a lot.

This zine is dedicated to the best bad guy I know, the real Dracula, Vlad Tepes of Romania, for being such an incredible guy and having such an amazing lifetime . . . and afterlife . . ?