From Fanlore
(Redirected from B and D's Excellent Adventures)
Jump to: navigation, search 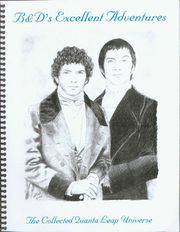 B & D's Excellent Adventures is a slash 267-page Professionals anthology with fiction by Jane Mailander. The front cover art is by Pat Cash. All but one story has appeared in Chalk and Cheese.

From a distributor, Agent With Style: "Contained in one volume are all the "Quanta Leap" stories Jane Mailander has written to date. These stories, originally printed in Chalk and Cheese, and including one original story just for this volume, follow Bodie and Doyle as they fall asleep in their own time and wake up in another. Usually, these times and places actually exist, but sometimes they find themselves in places from literature instead. As with the "Quantum Leap" show the series was named for, Ray and Bodie become different personalities and discover they have skills they never thought possible: being a Merry Man in Sherwood Forest; being a bull leaper in ancient Crete; being caught on the Titanic just as she's about to go down..."

From The Hatstand: "These stories comprise Jane Mailander's Quanta Leap series, using the device of Bodie and Doyle's being projected into different times and places, where they have to solve a problem or situation before they can leave. Most of the stories involve either fusion with another world or a crossover, sometimes with several different crossovers at once. Bodie and Doyle are slashed in this universe, but some of the individual stories are gen or edge towards het.[1]

"I Never Metamorphosis I Didn't Like" is part of my infamous 'Quanta Leap' series (A/Us where B & D remember quite firmly where they came from, even if they're in Sherwood Forest now). I did a take on Kafka's *Metamorphosis* because I got sick and tired of Doyle becoming cute 'n' fluffy aminals in people's stories, especially kitty-cats. You want Ray Doyle as an animal, fine, he's a six-foot fuckin' roach! Gosh, how enchanting! [2]

[If] you're a Jane Mailander fan, may I suggest her B & D's Excellent Adventures? It's a zine made up of a mix of gen and slash (frankly *more* gen than slash) stories. I'm particularly fond of the Indiana Jones takeoff, the Kafka story (which many people don't like, so be warned), and the pirate tale. Really, the only one I didn't like was the Titanic story, because I felt it wasn't as well written as the others (it felt more like it had been rushed together and had too many "guest stars" for my taste). I don't know what you know about these stories, but the basic gist of them is that, in them, the boys, for reasons they most definitely do not understand, are thrown into different eras, different personas without warning (kind of like Quantum Leap). Each and every time, they remember who they truly are, both during and after the fact. In each scenario, they need to accomplish something before they'll be allowed to go home. Often, other canon characters show up as well. Usually, they are unaware of who they normally are.[3]