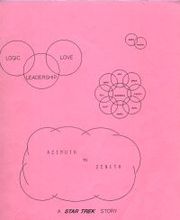 Two related zines are What Must Be Done and Rushing in Where Angels Tread.

"A McCoy/Scotty adventure, with a wildly frantic trip to the future to save Scotty's life. Scotty at his bravest, McCoy at his most demanding and driven. Bones has found the love of his life, and a new assistant he calls 'The Rookie.' The medical center of the future is something very special. And in the end, they almost relieve Jim Kirk of what little patience he had left. Mind melds like you've never experienced before. Mary's most popular zine." [1]

"Scotty is dying, and only a frantic, dangerous mission into an unfathonable future can save him. McCoy insists as only McCoy can do, and the Enterprise is on its way. A frantically driven McCoy meets the woman of his dreams, a strange voyage into uncharted areas of the mind, and the almost impossible task of saving his old friend's life. With Christine Chapel back at his side, can they do it? " [2]

Enterprise encounters an alien race from the galactic nucleus, who have an angelic appearance, a taste for iron-based meat and a pheromone lure to lull victims into worshipful passivity. When they incapacitate the ship, Scotty effects the Enterprise's escape by stealing some technology, but it gives him a lethal form of radiation poisoning. With McCoy leading the charge, they slingshot to the future to find a cure for Scotty, and discover that they all became heroes for discovering this particular cure. Returning to their own time, they embark on frantic weeks of keeping Scott alive, a galactic scavenger hunt for the necessary raw materials, and round-the-clock research. McCoy pushes himself literally to death and is drawn back from the abyss by Spock in a rather fierce mind-meld. Nicely done sub-plots include a romance for McCoy [points deducted for killing off the love-interest!], resolution of the Spock/Chapel romance (she turns him down), and a leave-taking with Mama Horta. Probably best not to look too closely at the technology and time-travel plot devices, and just enjoy the sterling characterization and dialogue, the fine roller-coaster ride of a plot, and the intense hurt/comfort scenes. [3]

Azimuth to Zenith is the second zine of Mary's that I have read, the first being Renegades. I liked this one much better. I found it very hard to picture Dr. McCoy a murder and on the run in Renegades.

Azimuth is a different kind of story. Here, Dr. McCoy is in his element trying to find a cure for Scotty's radiation sickness. All those years with his dilithium engines finally prove to be his undoing. All the usual cures do not work and it looks like the end for dear Scotty.

We have read numerous stories of the Enterprise crew going back in time. This time they travel to the future and encounter a few interesting things along the way; a medical center named for Dr. Leonard H. McCoy. It seems he discovered a cure for radiation sickness. When they find this out they must travel back and find the cure with a very close timetable to do it.

Along the way, Christine and Spock get closer and become friends. This story takes place before the first Star Trek movie. McCoy gets the girl! He has a wonderful relationship with the new chief nurse, Christine having moved on.

He gets to be a father to the nurse's son, a physician in his own right. Kirk hangs around in the periphery, where he belongs, and things happen.

I would recommend this zine to all McCoy lovers because it has everything; romance, adventure, excitement. No, I'm not going to tell you the ending. Buy the zine and find out for yourself. [4]