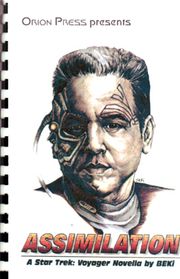 Across the mess hall, Chakotay stood near the replicator, his slump-shouldered posture a reflection of exhaustion. From the number of uneasy crewmen with cautious eyes turned to the motionless commander it was clear that whatever they' d missed, they hadn't missed it by more than a matter of moments. Opting for replicator fare rather than the garish display on the serving counter, Paris changed directions. Chakotay still hadn't moved by the time he reached him, so Paris slapped the bigger man lightly on the shoulder, adopting an overtly friendly demeanor designed to irritate a man who considered him less a crewmate than a necessary evil.

Chakotay reacted badly. He turned. His eyes went deadly cold. He attacked. Swarming the unprepared helmsman like a lateral warp core breach, Chakotay struck and stuck hard. Only the momentary warning of dead, cold eyes and the fact that the charge itself unbalanced him saved Tom Paris's life. Decisively placed blows fell short of their goals, shattering bones but failing to drive the shards through strategic gaps in the skull's defenses to penetrate the brain. Paris staggered.

Chakotay followed. Relentless merciless, he struck again, and then a third time. Bones broke with every blow, but the lethal impact of the ex-Maquis Commander's intent evaded him by a margin of millimeters. Flailing wildly, Paris slipped on his own blood and went down. Chakotay dropped a knee into the younger man's chest, multiplying body weight by gravity to deadly effect. Paris's sternum cracked audibly. The helmsman gasped. Blood filled his lungs, frothed to his lips. He struggled for a moment like a bug on a pin, then stilled. Blinking, his expression more confused than frightened, he stared at Chakotay as Chakotay set himself for the kill ...