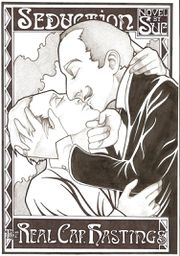 A cover designed by CeskaSoda, for the fic The Real Captain Hastings by Sue the Android.

While the Poirot fandom is small, Poirot/Hastings is one of its most popular pairings. The fandom itself is a perennial request in the annual Yuletide gift exchange, with Poirot/Hastings being a common request.