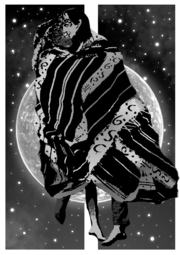 An example of Emyn's fanart, created for the Uncertain Times fanzine.

Emyn Nant Nefydd, who posts with the username gwenynnefydd, known alternatively as Cân Cennau, Madoc, Kelimian, Sianco, JackLyDarling, LittleGreyKida, KisumiCupid and Ciwpid, is a fan author, fanartist and podficcer mainly active in the Agatha Christie's Poirot and Deep Space Nine fandoms, and is one of few fans who write fic through the medium of Welsh. Ny also functions as a Tag Wrangling volunteer and a Welsh translator for the Organization for Transformative Works, and is a regular contributor to Fanlore.

Within fandom, ny is known for popularizing the Elim Garak/Kelas Parmak pairing, and the intersex Kelas Parmak headcanon. A number of nyr fics have become popular within fandoms, such as Splintered: A Romance in Six Seasons, Ballet Makes Fools of Us All (alternatively known as La Danza Di Due Pazzi), Gadach Wen, The C Word (co-authored by Brokenpitchpipe) and cymar. Ny also ran the DS9 Discord Kink Bingo and the K-Science Valentine Prom gift exchange.

In 2018, Emyn appeared as a panelist in a Nine Worlds Geekfest panel, discussing the role of the Welsh language in fandom. Ny also published several fanart images and a fanfic in the zine Uncertain Times.