From an ad in the November 1989 Queen's Own newsletter:

"First out of the starting blocks is Stephanie Wong. Stephanie writes, "I'm starting a zine, ARROW'S MESSAGE, based on Misty's Velgarth, (the planet where Valdemar and Rethwellan are located). We'll be publishing poems, art, stories, songs, etc."[3]

The zine was well received. From a note in the Queen's Own newsletter: "...Our oldest zine is Arrow's Message. Both its artwork and prose have been consistently above average..."[4]

All Valdemar zines are to follow strict guidelines set by the author Mercedec Lackey. In turn, fanzine editors would publish their own guidelines.

"CREDIT WHERE CREDIT IS DUE is herewith tendered to Stephanie Wong for making extraordinary and viable adjustments to her standards and guidelines for ARROW'S MESSAGE in order to allow more aspiring authors the opportunity to be included in her zine.

Stephanie writes, "I've come to slowly realize that the existing guidelines for ARROW'S MESSAGE are much too harsh and unreasonable. After taking a different point of view, I've written a new and more lenient set of guidelines. For those poor souls who were unfortunate enough to read the previous ones, my fervent apologies. Please write again for the new set.

"For those of you who have dabbled (if not more than dabbled) in Misty's world, especially those who are currently working on your personas, please write also. I would like to print your accomplishments int he zine and share them with the rest of us Misty fans. The zine's purpose is to further our love for Misty's work through our own creations . . . . "

The first 12 page "mini-zine" edition of ARROW'S MESSAGE will have come "hot off the press" by the time this reaches you. Judith and I regret that we weren't able to tell you sooner, as Stephanie had asked Judith to let you know so that you could order by March 21, but normally I start the final draft of each month's issue about mid-month, thereby allowing Judith at least two weekends for the copying and mailing processes, and this month I took even longer unfortunately.

For a copy of her new guidelines, please send Stephanie a SASE and 25¢ in coin for copying costs. I strongly recommend that you place the quarter between two pieces of cardboard or 3 X 5" cards which are then stapled or taped together. Otherwise, it may not reach her."[5]

Volume 1 Issue 1 was published in 1990.It has a cover by Kiri Namtved.

"Stephanie Wong's first issue of her zine, Arrow's Message, is on my kitchen table. Have you ordered your copy? She and her contributors have done a great job. The cover, by Kiri Namtvedt, is magnificent! Send your stories, poems, and/or artwork."[6]

"Stephanie Wong has completed a very successful first year. Stephanie says "Good News! Because of the astounding amount of submissions I've been receiving lately, I've decided to expand the 'zine to 36 pages this year. This means that subscriptions rates will be increased to $2.50 an issue or $15 a year to help offset the additional printing and mailing costs. If you haven't read an issue of AM yet, then I strongly suggest you do. The work that comes out from our submitters is absolutely phenomenal. If you're interested in guidelines, drop me a note. Please remember to include a SASE. Lady Bless!"[7] 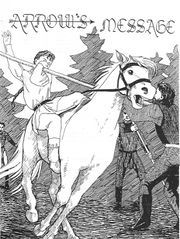 Volume 1 Issue 9 was published in July–August 1991 and contains 30 pages. The art is by Nami Sasaki, Laura Robles, Kiri Namtvedt, and Frances Quinn. 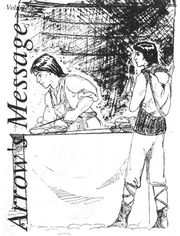 cover of v.1 n.9, "Lessons in Deercreek" by Frances Quinn

"A mage has wrecked havok in the village of Rocky Ford. Herald Marlys Tatena'sa N'toka'he must follow him to the Forest of Sorrows, and defeat him before his destruction becomes too great . . . Heynna is a wyvern hunter, traveling through the Pelagirs to deal with the wyvern who come into conflict with humans. She's been called to the village of Magorge to relocate a wyvern, only this one is more difficult than usual . . . DISCOVER WHAT HAPPENS IN ARROW'S MESSAGE Vo1.3 #3, now on sale..."[9]

The Arrow's Message Volume 1 Compilation was published in 1992. From an ad in the Queen's Own newsletter: