Larry Dixon is a pro-artist. 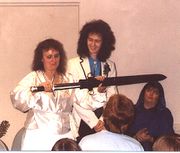 Larry Dixon and Mercedes Lackey were guests of honor at DreamCon in 1991 and presented with a replica of the sword, "Need." [1]

He often collaborates with his wife Mercedes Lackey.

Larry Dixon and Mercedes Lackey's attitudes and opinions regarding fans at cons (and elsewhere) appears to be a complicated one, as one filled with more than their share of drama.

In 1993, the editor of Lackey's official newsletter wrote: "There have been some grumblings in fandom that Misty and Larry no longer have time for their friends and fans. There are always a discontented few who are jealous of the success of others."

The editor followed up with a post by Lackey's husband, Larry Dixon, comments that he had made on GEnie in roughly December 1992. In those comments, he described their fans, and conventions, as very capable of theft, violence, confrontations, and threats:

At a convention, many of the folks attending have codes of honor & guilt that psychologists might politely term 'aberrant.' I have encountered a bootlegger who feels it is his deity-given right to make knockoffs of anyone's tapes if they refuse to sell him the rights. There's a female fan artist on the circuit now who plagiarizes 80% of her work. A couple of months ago, a dealer in Oregon was physically assaulted for allegedly giving a dollar's incorrect change; the assaulter was not expelled from the convention, even after the police came. Several people in San Francisco area fandom are being tracked by police as poisoning suspects; two artists I have met on the circuit are tax evaders & travel under aliases (present whereabouts unknown). "Every extreme can be found at a convention. We appear at them for the 90% who are fine people, but we take no chances with the other 10%!..... Nothing is harmless; believing your surroundings are Perfectly Safe only means the predators have to work less." - Larry [2]

Well, I don't want to take up too much of the newsletter space with my particular ramblings, but I wanted you to know how things are, and perhaps a little of where things are going. You know, I've been through a lot---garage hit by tornado, studio lost to fire, previous studio lost to flood, financial scares, stalkers, auto crashes, drunk drivers, fights, sabotage, betrayals, fraud, and so on. But is that cause to feel victimized? Nah. These things happen for good reasons. People who live intensely instead of just talking or faking get banged up. When you play life hard you're bound to get knocked around a bit! In my case it's been a good way to have perspective. Kindness isn't a weakness, generosity isn't either, but losing them both can be. [3]