For the fan, see Arkady (fan). 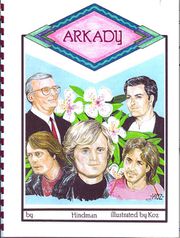 Arkady is a 163-page slash anthology by Hindman. The color cover and interior art is by Koz.

The reprint appears to have an additional illo, one of a wolf, by Hindman.

From Requiem Publications (2017 reprint): "Arkady Lachenko, former Special Forces, occasional undercover for the CIA prior to joining Miami PD Vice Division as Sonny Crockett's partner. (There is no Tubbs in this zine). Kady is a gay man struggling with his sexual identity (written in 1995, with the climate of the time period). He has a lover, and there are some sex scenes. Sonny and Kady cross paths with Mickey Kostmayer while investigating a series of vicious murders of gay HIV positive men in the first story. The rest of the zine is the story of Arkady's life, told though stories that cross with Equalizer, Miami Vice, and UNCLE, through to what happens after his death."