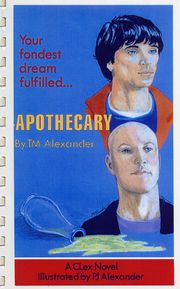 It was part of "The Alphabet Series." This series appeared to have had big plans, but there are only two parts to it. The other is Blizzard.

From a distributor, Agent With Style: "Commanded by his father to eject some Gypsies who had set up a campground overnight on Luthor land, Lex is flummoxed when a tarot reader hands him a vial of thick liquid and tells him that if he drinks it, he'll immediately have his heart's wish come true. Already knowing that it's impossible -- that Clark will never love him as he loves Clark -- Lex decides to fly in the face of reason and downs the drink. Then things start to get really interesting."