Another Turn of the Rack

Another Turn of the Rack is a Professionals circuit 105-page story by Meg Lewtan. 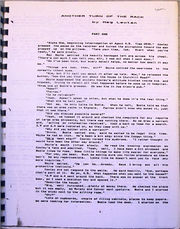 first page of the story

Just read Another Turn of the Rack by Meg Lewtan - (Thanks minesapint for a very good Friday night in!). She's not a very nice person in this one either is she, that Mather woman? Much more of the harriden than in Welcome to the Jungle, in fact I swear I practically saw her on a broomstick at one point... Would she really have got her silks with the potential to act like that, I wonder? Or maybe there was just so much else to this story that she wasn't developed quite enough for my liking. Although she certainly was given motive and so on, it wasn't that. I liked Dr Ross alot - well, I know I was supposed to, but still - where they faced each other off in the tribunal, ha!

Perhaps it was that Ross was somehow more subtley developed, and I respond better to that. Don't like it when I'm told really obviously This is the bad guy! Say Boo Hiss! Which actually isn't as silly as I first thought it sounded as a Pros fan, cos in fact the baddies are often a little bit murky of bad-ness - that's the problem with terrorists, they're not just nasty little people with an evil glint, they tend to have (uh-oh) their own idealistic glint as well. And of course there were both kinds in ATotR too - the vile abusers, and the terrorists-who-were-actually-after-the-vile-abusers. It was just like watching an ep - well, except for the sex ; )

I loved the scene where Mather first appears, bloody cow, soon got sorted by our resident psychiatrist. Got a bit tired of the protracted characterisation of whimpy, shell-shocked Bodie (as I do whenever this happens for Bodie or Doyle) but nevertheless quite an enjoyable read.[2]