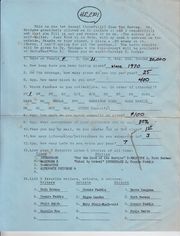 the front page of one completed survey, click to read

The Annual Zine Fan Survey was a two-page survey conducted by Carolyn E. Cooper in 1984 through the auspices of Universal Translator and one of its editors, Susan J. Bridges. It was hoped that the results would be available for the fifth MediaWest*Con in 1985. 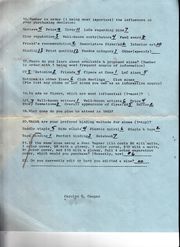 the back page of one completed survey, click to read

It is unclear, aside from fannish curiosity, what the answers would be used for. Carolyn states at the top of this survey that she hoped it would be an annual event, though it is likely this was the only one ever issued.

"A rough report of the 1985 Zine Fan Survey is complete. It is VERY rough, and while I feel much of the information is indicative, I would hardly call it conclusive owing to compilation problems... I hope to do another survey this year both by mail and at MediaWest*Con 6. I have a new programmer and a new program. I also have new questions, including whether zine buyers like mixed media zines and whether they prefer large, mixed media zines or very small single fandom zines." [1]