Attendance was officially estimated at 2,000.[3]

The convention was co-sponsored by Gainax, Cal-Animage, the founders of BayCon, BAAS, and Studio Proteus.[4]

During its inaugural year, AnimeCon went deeply into debt due to severe budget overruns. Soon after, a management dispute erupted which imperiled the chance of a follow-on. Many of the staff went on to form Anime Expo, while others went on to form a rival convention, Anime America (which was canceled in 1997 and went defunct shortly thereafter). The period between late 1992 and early 1997 is sometimes referred to as the "Con Wars" by attendees and staffers of both conventions. It was typified by a number of personal attacks and allegations of sabotage on and off the Internet (and in particular on rec.arts.anime).

Although Anime Expo is, for all practical purposes, considered separate from AnimeCon, the Society for the Promotion of Japanese Animation (AX's parent organization) took control of AnimeCorp in 1992 and assumed many of its legal and financial obligations (including all debts incurred), the rights to the AnimeCon name, and existing stocks of unsold merchandise (including large numbers of the aforementioned T-shirts). Pre-registrations for the planned AnimeCon '92 were converted into Anime Expo '92 pre-registrations.[5] Sometime after which, AnimeCon Corporation was formally dissolved.[6]

Today, AnimeCon merchandise is considered a collectible item by some. Program booklets and T-shirts can still be found. AnimeCon T-shirts were sold on behalf of the SPJA during the subsequent years of AX. 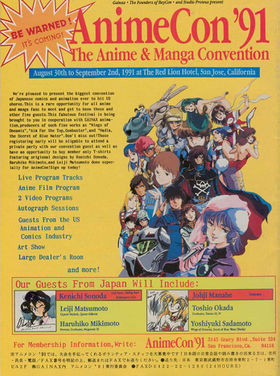