Angel Unaware and Other K/S Stories 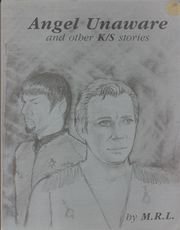 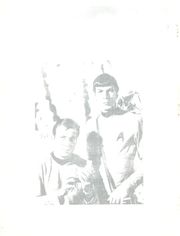 Angel Unaware and Other K/S Stories is a Star Trek: The Original Series slash 50-page zine published in May 1986 and containing stories by M.R.L.

The Paradise Syndrome? A lot of people reading and writing K/S seem to think that the thrilling thing about 'slash' fiction is when the protagonists finally have the perfect sexual encounter and then live happily ever after. ...Didn't Star Trek say that Paradise was ultimately boring?

People reveal what they're made of not in the best of times, but in the worst. And that revelation is what thrills me. Each of these stories presumes an intense relationship between Kirk and Spock, but I have many questions about that relationship. Does Love conquer all when the enemy is oneself, when the adversary is one's lover, when things are not what they seem? The answers may be in these stories. Then again, maybe not.

Let me know what you think. 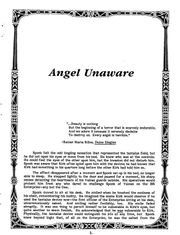 [zine]: It is a collection of six vignettes based on the premise that all K/S stories should end up happily ever after. The author takes great pains in setting up a situation and detailing the character's feelings. Unfortunately, once the climax of the story has been achieved, the reader is left hanging with the suddenness of an elevator rapidly descending. The writing is quite good and many of the author's perceptions are from unique slants. 'Dark Dreams Revisited' deals with the capture of Kirk and Spock by Orion slavers, Spock's actions to keep Kirk from being sold, and the eventual realization by Kirk of what really transpired. This story is the best of the collection. On the flip side, 'Alternate Ending' is far to weak in its construct to be believable. This vignette presents Kirk trapped in the body of Janice Lester permanently and his adaptation to the problems. This zine has no art or reduction of print in full zine format. [1]

[zine]: This 50 page zine contains 6 very different short stories all written by the same author. However they do have one thing in common — they all have a twist in the tale that marks them out from the usual.

The title story concerns a Mirror Kirk who hates himself and a Spock who wishes to learn about his Captain.

Dark Dreams revisited is a kidnap and rape story with a difference. Kirk dreams but can never finish his dream until an Ensign gives him a tape. Then Kirk has to persuade Spock to tell him a secret.

Enemy within the Mirror. An alternate Enemy Within. Here the difference between the two sides of Kirk are almost irreconcilable.

Alternate Ending. How Kirk copes with an enormous change in his life. A possible aftermath for Turnabout Intruder.

The Answer. Spock wonders about his future and lastly, The Question which is a sequel to the previous story. Kirk asks the question and is apprehensive about the answer he receives. [2]