And Not Fade Away

You may be looking for Not Fade Away, a Buffy and Angel meta essay. 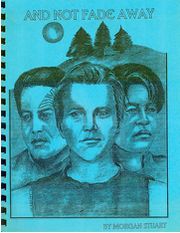 And Not Fade Away is a gen Star Trek: Voyager 97-page novel by Morgan Stuart that takes place after the events in the episode "Flashback."

When Chakotay, Paris, and Kim are stranded on a vicious alien world, Kes risks her sanity and Janeway risks her command to see that rescue eventually arrives. (41,040 words) [1]

Three stranded officers fight for survival on a planet as one crewmember fights for her sanity on Voyager. Set after 'Flashback.' [2]

Chakotay, Tom Paris and Harry Kim are stranded on a primitive class-M planet with no means of contacting the Voyager. The shuttle is damaged, and they are captured by the planet's inhabitants and sent to a work camp to spend the rest of their lives laboring for the overlord. Tom Paris is tortured and injured, forcing Chakotay to plan an escape. In a daring move, they succeed in escaping and head back to the shuttle, only to find it is gone, and with it, all hopes for escaping the planet. Without the shuttle, they can only head for the mountains, and hope they have the skills to survive the harsh environ. Meanwhile, back on the Voyager, Kes is suffering from strange nightmares as the crew tries to cope with the loss of the three crew members. While Kes struggles to maintain her sanity, the crew must overcome seemingly insurmountable obstacles before they can mount a rescue attempt to the planet, and hope they can get there in time to save them. [3]

It all starts with a shuttle crash. Chakotay, Paris and Harry are captured by pre-warp aliens who live in a fiefdom. Although their lord and master appears to be reasonable, he turns his prisoners over to a cruel overseer who makes their life a living hell. Paris, who has grown good at playing hero, sees that Chakotay is threatened and throws himself in the path of the oncoming alien who plans on hurting the senior officer. The helmsman is thrown into solitary confinement, brutally tortured and injected with a virus that eats away at his lung tissue. On Voyager, Kes is is able to sense what Tom is going through. A rescue attempt is thwarted, and Janeway decided to remain behind until they can recover the three men. This decision proves to be unpopular, and she faces a lot of hostility from the crew. Janeway was well written in this story, and I really appreciated her strength, humanity and compassion for her crew. On the planet, Paris is returned to his friends. He is critically ill, and Chakotay and Kim must take turns watching over him. Their situation becomes intolerable, and they manage to escape into the mountains. It's a real treat to watch these characters grow as they overcome their differences and work together to create a home for themselves. Tom's illness continues and puts a strain on his two companions. Paris feels useless; to fill his days, he is given the task of keeping a journal. Chakotay acts as the hunter, and often goes off for long periods to meditate and bring home the beef. On one of his excursions, his mount falls on him. He is finally rescued, and goes through an agonizing ordeal when Tom sets his leg. Back on Voyager, Kes continues to monitor the three officers, and their thoughts and emotions become intertwined with her own. At some point, it seems like her own identity is gone, but she becomes stronger at the end when the lost crewmembers are rescued. When they disembark, it is hard to recognize any of them because they have changed so dramatically. This novella was a joy to read. Stuart has managed to craft a believable and moving story about isolation, transformation, and survival. All the characters were right on the money, and the story flowed without a hitch. In fact, this novella was so epic that I could imagine it on the big screen. While not always an easy read, it is well worth the effort in the end. [4]