An Eye for an Eye

An Eye for an Eye is a Kirk/Spock story by Debbie Cummins.

It was published in the print zine The Legacy #3. 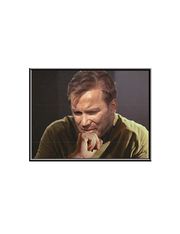 inside art from issue #3, "Anguish" by Ivy Hill -- "Anguish: An unusual presentation of Kirk looking down, appearing . . . the only word for it is ‘anguished’. It is the perfect artwork for Kirk in this wonderful story, ‘An Eye for an Eye’ by Debbie Cummins. [1]

"What should have been two days of quiet time with each other turns into a nightmare when an enemy from Kirkʼs past uses Kirk and Spockʼs appearance on the planet to wreak his vengeance."

Whew! Let me take a few moments to recover from the Legacy #3 story An Eye For an Eye, craftily written by my new favorite author, Debbie Cummins. The editors have wisely included a reader warning of the violent content and for those who try to avoid that kind of thing in a story, take heed, it is indeed graphic. I happen to be one of those people who almost walked out of Pan's Labyrinth, so I prepared myself. However, any content in the right hands is doable for me, therefore I put my trust in Debbie's writing and was rewarded in time for sticking by this gruesome and tender story. I love Debbie's interpretation of Kirk and Spock. It reminds me a lot of Jenna's-- the dialogue, behavior, equal loving between them, all is absolutely perfect. Both are sexy and "on" in every aspect. And this Spock particularly comes through as a being of such incredible integrity it moved me. Kirk is also well written and we suffer with him through pages and pages of... well, you'll see. Debbie is a pro at building suspense by giving little peeks of what is to come without spoiling the plot. She also deftly portrays self-created characters, giving them a (miserable as it is) life of their own. Find yourself a quiet place and a good chunk of time (it is a long story) for you will be unable to let anything break into your absorption of this story. And a handkerchief or two might come in handy as well. [2]

“Readers are cautioned for violent content.” This is the warning that greets the reader at the beginning of the story and it is, perhaps, warranted. However, the physical violence inflicted in this very serious story is only part of what makes the reader wince as she reads. Yes, Spock is being held captive and tortured, but Kirk’s suffering is just as real and possibly even more painful. Spock is being held in revenge for something Kirk did and Kirk feels that sense of responsibility and guilt in every angst-ridden moment while he helplessly searches for a solution.

I had the pleasure of providing a cga to illustrate this story, and in preparation for creating the picture; I was given a brief synopsis and short excerpt from the early pages. I can’t tell you how glad I was to receive Legacy and finally be able to read what happened! I found the idea of Kirk feeling as if he is the reason for Spock’s situation to be very inspired as it magnified his anguish tenfold. This may sound like a fairly simple premise, but the story is intricately plotted and involves a race of people with as much complexity as the story itself. There are very bad aliens, aliens who may not be all bad and there are those who are simply downtrodden in this society. As a setup to the capture, we are given the opportunity to see Kirk and Spock in a very romantic light as they prepare for a shore leave together. Some hot loving for which I will borrow Kirk’s words: “Lord almighty.”

The way the story opens is very innovative, I think, as it doesn’t involve anyone we know or anyone who will play a part in the story as it evolves. Yet this person and his actions set the whole scenario in motion and once the momentum begins there is no stopping it. Just as there is no stopping this writer, who continues to take h/c to new levels. She knows her way around words, and keeps the reader on the edge of her seat. [3]

There is a disclaimer at the beginning of this story, saying 'Readers are cautioned for violent content'. And there‘s a good reason it‘s there because of all the 'get Spock' stories I‘ve read over the years, in my opinion, this is the ultimate 'get Spock' story. Kidnapped by an old nemesis of Kirk‘s, Spock, blindfolded, chained, and helpless, is systematically physically and sexually tortured. Worse, Kirk himself is forced to witness most of it via disks that regularly arrive on the Enterprise. The author holds no bars when it comes to what Spock is forced to endure and some of the scenes are difficult to read. Even when there is some promise of relief when the two are finally reunited, the ordeal for both is far from over as Kirk is now forced to witness firsthand the torture his old nemesis inflicts on Spock. Yet the author amply rewards not only Kirk and Spock, but also the reader, for what they were forced to endure once the two are safely back aboard the Enterprise. The healing power of Kirk‘s touch is ever so evident as he attends to his beloved bondmate. It is all Spock needs, has ever needed, to recover from his ordeal and in turn, helps the reader recover, as well. There‘s no doubt in my mind that, due to its content, this story will not be every K/Sr‘s cup of tea. But it is an engaging and gripping tale that, at the end, proves the old adage that 'Love conquers all'. [4]

This was a good long h/c story to read. As always with Debbie, the story has a well thought out plot and believable bad guy characters. Some of the bad characters caught up in the situation eventually tried to help Spock and again, Debbie has enough depth to make this a believable change. The story revolves around Spock and Kirk who are bonded, planning a shoreleave together. In a mission immediately before this, a previous enemy of Kirk‘s plots to take revenge and does it by torturing Spock. [5]