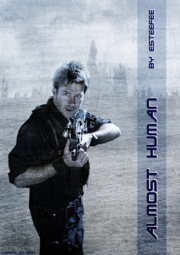 Almost Human is a Sheppard-centric Stargate Atlantis gen story by esteefee. It uses the in SGA fic popular robot!John trope.

Summary: "Cybernetic/Human Construct Type 2 with enhanced artificial intelligence, Serial Number 5592930299, Designation: Sheppard, Major John is sent on a mission to the Pegasus Galaxy. He and twenty-six other cycons on the expedition are hiding a secret."

The author describes it as a sorta "mishmash of every cyborg movie/novel written since the beginning of time" and names the robot in the Terminator movies as an inspiration.[1]

The cover art is by lorien who created two different covers for the story.