AlleyWays is a Star Trek newsletter with a focus on the actress Kirstie Alley.

There were two issues. The zine was discontinued due to disappointment from fans after Kirstie Alley had been replaced as Saavik by Robin Curtis. 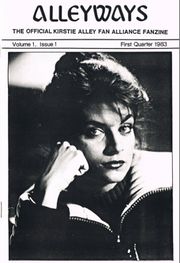 Thanks so much for the copy of ALLEYWAYS. It is a terrific job—entertaining, informative and varied in layout and content. Everyone who helped put it together deserves a nice pat on the back, and I think Kirstie should be tremendously proud and honored! Your kind words about me were really sweet. But even more, I appreciate Emily's reference to STARLOG as "fandom's bible." By the way, I am in close and frequent touch with producer Harve Bennett and director Leonard Nimoy, and we will be keeping fans up-to-the-minute with ACCURATE data (not rumors) on the progress of STAR TREK III in the pages of "fandom's bible." Let me offer the STARLOG offices as a meeting place if Kirstie comes to town, and you need someplace for members of your alliance to get together with her. I'll even plug in some hot music 'cause I know first hand—that lady loves to boogie! [1]

What do I think about the newsletter? Hmmm. Be honest? No seriously, it was fine. Your graphics are very nice and "Spot" is always appreciated. Of course, I'm in this for Saavik and the stories/articles dealing with her so there wasn't too much in it for me. I was a little surprised that KAFA has an official charity (don't we get a vote?) and while I really don't give a damn what charity it is, I would have thought that it would be more international because of the membership than having one centered in New York. I mean, I got my own animals to worry about, why would I send money to look after mutts in New York or even in America for that matter. Also, I*m a 1ittle leary of an organization that keeps a dog with internal injuries alive for three weeks just to "love" it. Either it was in misery in which case they are unnecessarily cruel, or it was unconscious in which case the dog wouldn't care about the "love" sent its way. Get real . They should have put it down immediately. The letters were nice. Lots of egoboo there. I think you need another regular feature for the newsletter but I'll be damned if I know what it is what it should be. Reviews if Alley had done more. Or maybe this is where the 'plugs' for comics, fanzines, etc. should be. Or a con report detailed rather than in Connie's introduction.[2]

I think you and Connie both are doing a tremendous job with KAFA, and it's a club that we can all be proud to be in! I also want to tell you that I think that KAFA-PAC is a wonderful charity and is just perfect for the club! I'm not just saying this because I'm friends with Frances — I really do mean it very strongly. I feel it is an extremely important charity that deserves all the help and support it can possibly get and I'm glad KAFA is there to help support it.[3] 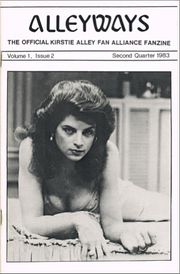