You may be looking for the Albany, US con Albacon.

Albacon was a science fiction convention held in Glasgow, Scotland.

Albacon was the name given to most of the conventions held in Glasgow. Why call it Albacon? Well, the 1980 Eastercon (the British National Convention) was held in the Albany hotel, had an albatross for a logo and was the first Eastercon ever in Scotland, which was known long ago as Alba. Hence Albacon. I bet there are former Albacon committee members reading this who didn't know that.

The Albany hotel is currently called the Forte Crest, but could be called anything by 1995. It's a top notch hotel in terms of accommodation but has poor function space for convention purposes, so it has only ever hosted that one SF con. (Tip: the bar gives away free snacks, samosas, mini-pizzas etc. around 7pm if you want to freeload.)

There were 3 Eastercon Albacons, each having around 1000 members. In between them we ran many summer Albacons that were the largest regional conventions in Britain, attracting up to 800 attendees. Uniquely for British cons, many of the attendees were "walk-ins", probably attracted by the star guests and multi-stream programmes that became the hallmarks of Glasgow cons. There was a strong lobby group who wanted Intersection to be called Albacon, not just for sentimental reasons, but because it is a name recognised by the local media and potential members.

When the original team retired after Albacon 88, the lack of a convention led some of the younger Glasgow fans to create their own con which became known as Albacon 91 - TNG. It is not recorded if the con chair was bald and had trained as a Shakespearean actor. [1]

Jim Barker and Colin Kapp were the Guests of Honor.

Throughout the con, I was conscious of something missing, the warm, close-knit feeling that one gets at a Star Trek con. It could just be that I am more at ease with Star Trek people but I don't think so. And there was one incident that Janet hopes devoutly will not become customary at Star Trek cons - the chairman of the committee, Bob Shaw (no, not the writer, the other one) was unceremoniously dragged from the hotel and tied to a lamppost, escaped and was recaptured (under the jaundiced eye of the police who cruised by several times) and was then sprayed with vegetable colouring and had a hosepipe turned on him. The air around was distinctly blue! Not quite the behaviour one has come to expect from the sophisticated Star Trek fan! [2]

Marion was a Guest at Albacon 3 where she was somewhat annoyed at the quality of research done to compile her bibliography. It was not that it was inaccurate, rather that it was too accurate and contained some "adult fiction" that she had hoped nobody would ever discover was written by her. [3]

Norman Spinrad was the Guest of Honor, replacing Harlan Ellison at the last minute.

There was an "active Star Trek room."

When Harlan [Ellison] cancelled on Albacon 84 on short notice he sent his apologies and his good friend Norman Spinrad in his place. Norman was a splendid guest, charming the fans who had come to see Harlan and who were upset at his non-appearance. After a while he got fed up explaining why Harlan wasn't there and resorted to telling people that he really was Harlan, but in disguise.

In a moment of desperation prior to Albacon 84, looking for something different for the programme, someone suggested a custard pie fight. Eventually it appeared on the programme and so we had to go ahead and stage one using paper plates and shaving foam. Unfortunately, the foam ran out just before the Committee Vs Hotel Staff bout. Not to be cheated of their chance to thrash the SF weirdoes, the kindly chef went off to the kitchen and whipped up some real custard. The incredible mess from that fight was matched only by the incredible smell from the protective tarpaulins a few days later after they had lain in a store room awaiting return to their building site. When Albacon 91 was being planned the first item the committee wanted to revive from the old conventions was the pie fight: perhaps Intersection will be crazy enough to do the same. [4]

The Guests of Honor were Harlan Ellison, Anne McCaffrey, and Colin Fine.

Neil Gaiman met Harlan Ellison at this con [5], the day before Ellison met the woman who was to become Ellison's wife.

The saga of Harlan Ellison coming to Glasgow could fill many volumes. Suffice it to say that he was due to come over to Albacon 84 but cancelled on 4 days notice, promising to come instead in 85 if we wanted him. We certainly did want him, if only to give him a doing for cancelling on us. Instead of wreaking violence on him ourselves, we took a more subtle approach and introduced him to Sue, who went home from the convention with him and is now Mrs Ellison. [6]

The Guests of Honor were Brian Stableford, Josephine Saxton, and Chris Boyce.

Brian Stableford and Josephine Saxton were the Guests at Albacon 87 providing illuminating glimpses of the differences between the writer of hard SF and the writer of imaginative fiction. I had the job of interviewing Ms Saxton at the end of a week in which she had given up smoking 60 cigarettes and drinking 20 cups of coffee a day. Next time I'll get an easy job, like a knife thrower's assistant. [7]

The Guests of Honor were C.J. Cherryh and Heinz Wolff.

Having attended every Albacon (Faircon) since 1978 and often been disappointed by the STAR TREK programme, which usually consisted of a few videos and not much else, I decided that rather than complain about the situation I should do something about it. I wrote off to the Albacon Committee offering my services, plus those of any other unsuspecting souls I could rope in, to run the Trek video programme and display room. This offer was accepted - with more than a little reluctance by some of the Committee which held that media SF had no place at a SF con - my thanks to Michelle 'Cuddles' Drayton for pushing it through.

1000 hours on D-day, Moira Russell and I began transporting the display items to the hotel - we planned to start the programme at 1400 hours. I was a little worried that we did not have enough display material but as it turned out there was more than enough! By 1300 all systems were go - that is until we tried to set up the TV and video and discovered that we had not been given a 2-way adapter and only had on socket in the room. We asked a Committee member for one and were told that they had all been handed out. I made a mad dash for the shops and bought one, rushed back to the hotel to discover that the Committee member I had asked had found one! If anyone wants to buy a second-hand, unused 2-way... perhaps not.

1415: doors opened (what's 15 minutes at a con?) to a queue of people waiting, none too patiently, to see 'Encounter at Farpoint'. The programme consisted of the original TV series, Next Generation, Films, Animateds, Bloopers and other bits 'n pieces. We expected a great deal of interest to be shown in TNG due to the fact that most people had yet to see their first episode. However, the original series proved to be every bit as popular despite the fact that most people have seen each episode five or six times at least. There were even shouts of protest when I proposed dropping an animated episode in order to catch up on the schedule. All in all I would say that the Trek programme was the most popular of the media programmes. Indeed, it was so popular that it ran constantly from Saturday 0900 until Monday at 2300 and for the most part the room was bursting at the seams - not even 'standing room only'.

As for the display room - at first people stuck their heads round the door for a quick look than disappeared. Gradually however curiosity won out over shyness and we had a full house there as well. For some 'new' fans this was their first opportunity to talk about their vice with other fans; their first exposure to fandom. Some of them spent hours with us and if I had sold every item in the display I'd had an offer for I would be very well off!

All in all, despite the fact that neither Moira nor I got to see much else of the con, and I was exhausted from running the all-night shows, we both enjoyed ourselves very much. We would willingly do it all over again, wouldn't we Moira... Moira... she was here just a minute, ago.[8]

J Cherryh was a very popular choice as guest at Albacon '87 [sic] where she added a new dimension to Guest of Honour speeches by bringing along her guitar. Two former worldcon programme designers, as un-starstruck a pair as could be imagined, came away from a two hour discussion with her declaring that they had just had the best conversation of their lives. What C J thought of it is not known. [9]

The Guests of Honor were Alan Dean Foster and Chris Achilleos.

The Guests of Honor were Robert Asprin and John Salthouse.

Albacon 94 had Robert Asprin as its main guest. A laid-back gent from New Orleans, he held court on the convention bar most of the time, sipping bourbon and recounting anecdotes from conventions and publishing deals long gone. Though he was very popular with all who attended he did get the backs up a few of the locals by likening Glasgow's majestic river, the Clyde, to a drainage ditch on the Mississippi. [10]

The GoHs were Harlan Ellison, Terry Pratchett and David Hardy. 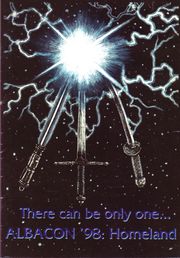 The GoHs were Ray Harryhausen, Diana Wynne Jones, and Kim Newman. It was held jointly with Homeland, a Highlander convention.