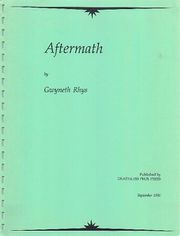 It was a STIFFIE Award nominee for Best Pros Novel of 1995 and required an age statement to purchase.

"Set against the backdrop of a bombing case, this is a novel about chance, choices, and life-changing revelations. In many ways, I'd still like to wish it into the cornfield, but the masses have spoken, so here it is... I wrote this, and other Pros stories, long before I had access to Brit-checkers; I apologize in advance for flagrant Americanisms." [1]

From Media Monitor: "Doyle discovers what it means to love, only to have it brutally taken away from him. Can he survive the pain and learn to love once more? Can he risk losing everything he cares for a second time? And will Bodie risk revealing a long-held secret, one which could drive Doyle away from him forever? Set within the world of CI5 against the backdrop of a tense bombing case. 'Aftermath' is a B/D novel of chance, choices, and life-changing revelations, an emotional ride that explores the deepest passions and fears of two men who have strong needs and stronger ties."

Summary from The Hatstand: "A slash novel set in the future when Doyle, in the aftermath of his wife's death, turns to Bodie. Much of the novel revolves around their memories of and relationships--Doyle romantically, Bodie as a friend--with the dead woman. Although she never appears in the novel in person, the OFC dominates it to an extent." [2]

"I liked Aftermath a lot. I thought the psycology was quite realistic and complex -- these are not perfect characters but they are rich and believable.

As the story opens, Doyle's wife has just died in a bombing; Bodie helps him cope, and we learn that he's been in love with Doyle for a long time. Eventually, and with a couple of major developments, Bodie and Doyle get together.

There is a clear parallel between Bodie and the dead wife, and the reader is left with the question as to whether Doyle fell for a Bodie type of person, twice, or whether Doyle was seeking for a wife replacement. The wife herself is a rounded character, even seen in flashback mode: indeed she plays a pivotal role in making Doyle realise what Bodie's feelings are. This is my one quibble with the story, as the intervention is a bit too overt -- makes the wife a bit too perfect and Doyle a bit too un-perceptive. But this was a quibble that hit me *after* I read the story and thought back; as I was reading it I was perfectly able to suspend disbelief and enjoy the reading.