After Lights Out is a slash Hogan's Horoes anthology fanzine series focusing on the Hogan/Kinch pairing.

There were three issues. They contain fiction and poetry, but no interior illustrations.

While this zine was not specifically bootlegged, it was a topic heavy on many faned's minds in the early to mid-1990s.

From the first issue: "This is a (very) amatuer effort and isn't meant to infringe on any previously held copyrights. Any unauthorized duplication without the permission of the editor and writers will be considered bootlegging. Perpertrators will be forced to write "I will not bootleg zines" 1000 times on the nearest chalkboard."

From issue #1: "In this space there should be a pink triangle. (This zine is printed in conjunction with Pink Triangle Press) If there is no pink triangle, or if it's in any color other than pink, then you have bought a bootlegged, unauthorized copy. Please report this to the editor and/or the con committee immediately. Help stamp out bootleggers!" 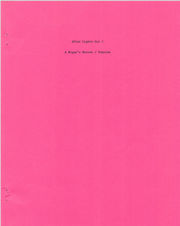 After Lights Out 1 was published in April 1995 and contains 87 pages. It has clip art "courtesy of Dover Art Books."

This issue was nominated for a STIFfie.

The editor wrote that it had "Musical Interludes by: (Or who I listened to while typing this) Yanni, Melissa Etheredge, Sarah McLachlan, Indigo Girls.")

Aside from a Newkirk/LeBeau story, everything else in the zine is Hogan/Kinch. This isn't to say we don't like the other characters, (Personally, I'd love to see Carter with any of them, and the Colonel had a lot of lady friends as well.) but the deep friendship between the Colonel and his radioman lends itself perfectly to romance. It's obvious in the series that Hogan and Kinch are friends; the stories in this zine merely take that friendship a step further.

A second issue of ALO is already in the works; we already have a Hogan/Kinch first time story as well as some poetry. Hopefully, Khylara will be back with more from her "After The War" series,

as well. So feel free to send something in! We'll take absolutely anything! And if you can draw anything above a stick figure, PLEASE drop me a line!(Hell, at this point I'll even take stick figures!)

Well, that about does it. So what are you waiting for? Start reading.

Until Schultz goes on a diet...

Contains a continuation of Khylara's "After the War" series, plus a story set to Tiger's "I Have You" universe, plus a first time story. Poetry by Khylara and North Star.

This was the submission request for this second issue (printed in issue #1):

Stars and Stripes Press is now accepting submissions of stories, poems, filks and especially art for a second . issue of love and lust featuring the men of Stalag 13.

We're looking for both straight and slash, and all characters are welcome. Already we have a first time story featuring Hogan and Kinch, as well as more poetry from North Star and Khylara, but I'd love to see stuff featuring the other characters. (Any Carter or Baker fans out there?)

All submissions must be typed and please include a SASE with all inquiries. (It's hard to get stamps in a POW camp.) Also include an age statement. Please send all stuff to:

Deadline is open. Shooting for sometime in 96.

So what are you waiting for? Sit down, find a pen and tell me just what prisoners-of-war do after lights out! 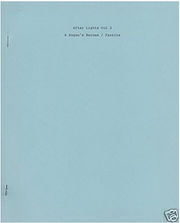 You are Receiving this Zine Because page from issue #2

From issue #2: "Any unauthorized duplication without the permission of the editor and authors will result in the perpertrators being forced to do the Jane Fonda Workout at swordpoint until they pass out or throw up, whichever comes first. You have been warned!"

Welcome to the second issue of "After Lights Out" We've got some good stuff this time around, including some poetry

from North Star, the continuation of Khylara's "After The War" series" and a story from Tiger's "I Loved You" series, (which is based off her poem from ALO 1) Once again, all of the stories and poems in this issue are Hogan/Kinch. This is not to say we don't like the other characters; we would be more than happy to see stuff featuring the other men. However, it's the age old dilemma... we can only print what I get, and what I get centers on the romance between the Colonel and his radioman.

My thanks to Tiger, North Star and Khylara, whose work fills this issue. Without them this would be a pile of blank paper and I wouldn't be tearing my hair out right about now. A 21 gun salute goes out to Jean Thrower for long letters and emotional support, and Dave and Terry for doing their bit to get me out of the house. Thanks to you all.

Well, that about does it here. May romance fill your life wherever you may find it.

After Lights Out 3 was published in May 1997 and contains 92 pages. 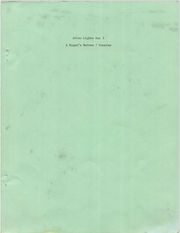 From the editorial (which mentions a story by "Tiger"—a name that doesn't appear in the table of contents):

We have a lot of stuff in here; another chapter from Khylara's "After The War" series, as well as poetry based off her first chapter in ALO 1, a wonderful Newkirk/LeBeau story demonstrating the many things two randy guys can do on sentry duty, a touch of voyerism and another of blackmail... Those guys sure are busy! (It's a wonder they ever found time to harass the Germans with all the sex going on!)

Once again, aside from Tiger's story, all the material in this zine is Hogan/Kinch. I don't know what it is about these two, (okay, I do know. They're perfect together!) but this couple has done more than their job in the line of duty in inspiring our writers. But even though I do like (really like!) the antics of our favorite Colonel and his radioman, I do like the other characters. Any Carter or Baker fans out there? Submissions are now being taken for a fourth issue, due out probably by next May. Gen material will also be accepted for my genzine "Unsung Heroes."

Thanks go out to Ray, Kenny, Dave and Terry for doing their bit once again in getting me away from the TV and the typewriter and back out into the world. (It's so big out here!) Thanks also to Jean Thrower for moral support, 15 page letters and 4 hour phone calls. (Maybe I shouldn't thank her for the phone calls... my bill...)

That about does it; so what are you waiting for? Start reading! (And when you're done, write something for #4!)