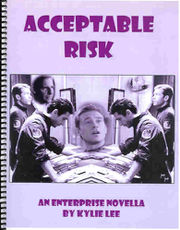 Acceptable Risk is a slash 142-page mainly Tucker/Reed Star Trek: Enterprise novel by Kylie Lee. The cover and art is by Helyn Highwater.

Discussed at Length in a 2003 Paper

The author wrote an article about Star Trek: Enterprise slash fiction, and in it, discussed this series in detail. See Confronting ''Enterprise'' Slash Fan Fiction.

I've never written fiction, really, or had the desire to write fiction. I've never really felt I had that much to say, and in addition, I'm too pragmatic. Were I to write, say, a romance novel, I wouldn't be able to handle the misunderstandings so necessary to drive the plot, and the thought of making up a bunch of characters and throwing them into unlikely situations didn't sound like fun as much as a chore. So it came as a complete surprise to me when, after viewing a Star Trek Enterprise episode entitled "Silent Enemy," inspiration struck. Frankly, that had never happened before. It was the first time where I felt absolutely compelled to write fiction.

Enterprise, which went on the air in September 2001 and as of this writing has just begun airing its second season, is the latest television program in the Star Trek franchise. It is set in time before the original series. I have to admit that the first few episodes I saw were simply not very good. As an avid Star Trek fan, I had high hopes for the show, although they were dashed in the first few episodes, several of which were frankly bad. But with "Silent Enemy," I saw subtext. I saw, god help me, sexual tension zinging from two of the characters that was just begging to be explored. And out of subtext came a piece of fan fiction (fanfic)—fiction written about a television program featuring the characters in that program. I sat down at my keyboard, and I wrote. I described what I saw on the screen: the intensity between the two characters. And I wrote a story to ex plain what I saw on the screen. I embedded the story inside "Silent Enemy" and just after the action in that canon episode, to deal with the repercussions of what happened in my version of events. I wrote this:

And then I wrote this:

Tucker didn't shut his eyes as he and Reed kissed. It was a light kiss, an exploratory kiss, to test reaction. He slid his hands up Reed's thighs, settled on his hips, and then urged him slightly closer. Reed pulled his head back and opened his eyes. The intensity was still there, and the visceral link Tucker felt as their eyes met made him catch his breath. Reed slid his body forward. Tucker, hands settled lightly on Reed's ass, was dimly aware of Reed's erection pushing against his stomach, and his own cock stirred. They stared at each other, face to face. Reed breathing heavily, for a long moment. Reed's pupils were huge.

And let me just say that I didn't stop there. In some detail, I described Tucker and Reed's first sexual encounter, although the story, entitled "Acceptable Risk," does not end with them together as a couple. I posted it on the Internet to an Enterprise archive site for fanfic. I got good feedback. I wrote a sequel, then another, and then a bunch more—a total of nine stories in this arc. I wrote an entire backstory, which came to be known as the Acceptable Risk series, to Season 1 of Enterprise that was based on the premise that Commander Charles 'Trip" Tucker, the chief engineer aboard the starship Enterprise, and the British armory officer. Lieutenant Malcolm Reed, were having an intense secret homosexual relationship. I gave them post traumatic stress disorder (canon source inspiration for this: "Shuttlepod One"). They admitted their love for each other. Then I broke them up. Thanks to "Desert Crossing," I got Captain Jonathan Archer in on the action. I managed to explain away Tucker and Reed's overt heterosexuality in "Two Days and Two Nights," and I included some Bondage Lite when they got back together.'

Slash is, for the uninitiated, a genre of fanfic that posits a homoerotic relationship between two characters, usually male. The term "slash" comes from the punctuation (the / symbol, also known as a virgule or a solidus) used to separate the initials of the pairing. "Acceptable Risk" is Tucker/Reed slash, or T/R. The very first slash couple was none other than Kirk/Spock, or K/S, and such fanfic dates to 1976 (Penley 483). Although the notation is used to contextualize any fanfic story that features a romantic relationship between any two characters, of whatever sex, in order to be in the genre of slash, a story has to feature a same-sex pairing, although female/female slash is rare. Slash is very often sexually explicit. It's mostly written by straight women, although of course plenty of gay men and lesbians read and write it too. And there is a lot of it out there. After I saw "Silent Enemy," before I drafted "Acceptable Risk," I surfed the Internet and in an hour, I had more Enterprise slash than I knew what to do with. In fact, one discussion group, the now-defunct Entslash, was set up as a forum for slash fanfic before the show even aired, in anticipation of slashiness to come.